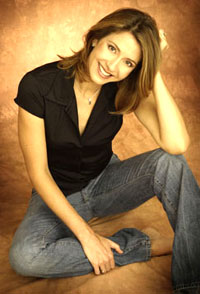 Over a decade-and-a-half, her content has evolved into darker, disturbingly modern storytelling akin to the Emmy Award-winning series Big Little Lies.

The Journal of Mortifying Moments (2004) was published in North America and thereafter in the UK, Australia, New Zealand, the Netherlands, Italy, Korea and Russia. Film and television rights for the novel were optioned.

Chronicles of a Mid-Life Crisis (2008) details the break-up of a 16-year marriage due to the husband's unexpected disenchantment, the subsequent rebelliousness of his 15-year-old daughter, and the eventual reunion of her parents, Trent and Lucy, in order to deal with the parenting crisis.

The Secret Lives of a Soccer Mom (2006)--in which an adulterous friend is found dead in a garage, and only her friend, the female narrator, knows she was having an affair--was also released in the UK, Australia, New Zealand and South Africa under the more homogenous and forgettable title Secrets and Wives, published by Piatkus Books.

It was followed by Unravelled (2007), a tale of "knitting, betrayal and friendship."

Will This Chicken Give Me Man Boobs? (Greystone, 2009), her first non-fiction book, is a humourous account of how she and her family do their best to become environmentally responsible. One of her children can't sleep properly worrying about the fate of polar bears. So how much environmental awareness can there be until it becomes too much? Harding also subtlety points to several helpful resources throughout the book.

After a lighter novel, My Parents are Sex Maniacs: A High School Horror Story (2009), Robyn Harding's cleverly-titled screenplay The Steps details an attempt to bring a disparate, blended family together with a well-intentioned but naive announcement from Dad and his new wife that they plan to adopt a child. It doesn't go down well with their offspring who already look askance at the union. The Steps was made into an independent feature film for which Harding was also the executive producer. This movie premiered at the Toronto International Film Festive in 2015) and was the closing gala film at the Miami International Film Festival.

Robyn Harding's The Party (Scout Press / Simon & Schuster 2017) is a shudderingly unforgettable but compulsively readable morality tale about how comfortable, suburban lives can so easily and horribly go awry. If you are a parent and you think you are being responsible by allowing a teenage party in your house, with kids from supposedly good families... Well, yikes. There are legal pitfalls. The Party is a perfectly executed, mainstream novel that will almost certainly be made into a movie. Set in San Francisco, it starts with a good girl's 16th birthday party downstairs with just a few girlfriends. We'll say no more.

With The Party, Harding has fully and probably irrevocably graduated from the chicklit ghetto with a feat of superb, chilling storytelling. It's not rated PG, it is PG.

Harding's The Swap (Simon & Schuster $24.99) was shortlisted for a Giller Prize.

The Journal of Mortifying Moments (2004) novel

Chronicles of a Mid-Life Crisis (2008) novel

Will This Chicken Give Me Man Boobs? (Greystone, 2009) non-fiction

If you are a parent and you think you are being responsible by allowing a teenage party in your house, with kids from supposedly good families... Well, yikes. There are legal pitfalls.

Last year Robyn Harding's The Party (Gallery/Scout $22) was welcomed as a shudderingly unforgettable but compulsively readable morality tale about how comfortable, suburban lives can so easily and horribly go awry.

The Party is a perfectly executed, mainstream novel that will almost certainly be made into a movie. Set in San Francisco, it starts with a good girl's 16th birthday party downstairs with just a few girlfriends.
With The Party, Harding fully and probably irrevocably graduated to mainstream fiction with a feat of superb, chilling storytelling. It's not rated PG, it is parental guidance.

Now she's returning this summer with Her Pretty Face, an equally dark tale of contemporary female friendship in the realm of Sara Shepard's Pretty Little Liars -since made into the Emmy Award winning TV series with Nicole Kidman and Reese Witherspoon, scripted by David E. Kelley.
Stay-at-home mom Frances Metcalfe struggles with her weight, self-esteem, and her troubled son. When he gets into an elite private school, Frances thinks she's set to emerge from her social hell. That is, until something happens that sets the whole school against her and her son, plunging Frances back into misery.

Seemingly out of nowhere, Frances is befriended by another school mom who is rich and powerful. They bond against the other elite school mothers. Of course it's too good to be true. Frances's beautiful new friend has a deeply dark past that threatens to end in tragedy for her. It involves murder. For info on Harding's other books see abcbookworld.com 978-1-50117-933-4


"Robyn Harding grew up in Quesnel, a logging town in northern British Columbia. To relieve her small town angst she turned to creative writing, hoping to become another S.E. Hinton and publish a novel at seventeen. She also hoped said novel would be made into a movie starring Rob Lowe, Tom Cruise and Patrick Swayze whom she would fall in love with and eventually marry. (Unfortunately, this dream was never realized, but she did end up marrying an Australian man who can't dance but is still quite sexy in his own masculine way.)

"After high school, creative writing was relegated to a hobby and Robyn moved to Vancouver. She studied English Literature, journalism, and then marketing, eventually landing a job at an advertising agency. This exciting, dynamic industry was a delightful challenge until the deadlines, egos and politics turned it into a stressful nightmare. By this time, she was also the mother of a young son and daughter. Tired of juggling motherhood and a full-time career, Robyn left her agency job to stay home with her children and work as a freelance copywriter.

"When she began to fear that her brain might ooze out her ears from lack of use, Robyn began to write fiction again. Over the years she'd attempted to write deep, literary novels a la Margaret Atwood, but they were never very good and she never got very far. She decided to try her hand at humor and knew immediately that she'd found her niche. Robyn lives in beautiful Vancouver, B.C. with her husband, kids, and a very small, completely frivolous dog named Ozzie."