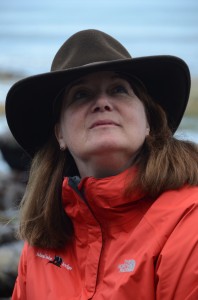 
Diana Hayes studied at the Universities of British Columbia and Victoria, receiving a B.A. and M.F.A. in Creative Writing. At UBC she was poetry editor of Prism International from 1980 to 1982. Her published books include Moving Inland, The Classical Torso in 1980, The Choreography of Desire, and Coming Home (anthology). Her play, Islomania: Saga of the Settlers, was produced by Salt of the Earth Productions in 1984 as a tribute to early Salt Spring Island pioneers. She has been production manager for Salt Spring's Theatre Alive, a member of Photosynthesis and started the Salt Spring Seal Swim Team in 2002. Hayes has expanded her poetic vision into the realm of photographic dreamscapes and narratives. She divides her time between writing, photography, producing literary events and working as a professional fundraiser.

EMPLOYMENT OTHER THAN WRITING: Hospital Administration

Diana Hayes? remarkable talents are fully evident this month, with release of her new book Labyrinth of Green and a photo exhibit at the Salt Spring Public Library showcasing her wonderful way with both words and image.

Though small in size and just about 100 pages, Labyrinth of Green holds a remarkable range of expression. The Plumleaf Press publication is beautifully produced, with its bright white cover and pages set off by full-colour images.

Hayes has provided new poetry divided into five different categories that move from reflections on her youth and her family to experiences with nature, through to death and beyond. Supplementing these thoughtful meditations are her own beautiful photos, plus quotations from fellow poets, introductory passages and even the odd footnote. End notes provide more information on the provenance of some of the poems.

Hayes is certainly adept at the poetic use of language, shaping complex thoughts and layers of meaning into spare and elegant arrangements of words. The visual and emotional imagery of a single stanza can be breathtaking. Take for example the beginning of Psyche and the Ladder, which addresses the lessons of adolescence through the metaphors of Greek mythology and its underworld. ?A switch gets tripped/without warning she steps blind/ into the sinkhole dropping/ from daylight to pitch night/ feeling only the blood on her shins.?

In the section related to death, Hayes ably demonstrates the Celtic reverence for the transformation and the close connection between the natural and eternal worlds, with birds often acting as medium and messenger. The poems These Little Deaths and Thirteen Ways to Free a Crow offer eyewitness accounts of life and death as close at hand as the backyard. Hayes illustrates the heartbreak of ?small? deaths in a way that honours our emotional capacity for grief and opens the possibility of mystery beyond, even while accepting that the natural cycle of life necessarily includes its loss.

?Raven?s chorus strikes grief by the neck/ the forest a dark audience,? she writes in These Little Deaths.

Hayes? library exhibition is testament to her long commitment to expression in multiple formats. The lobby showcase displays some of her many previous publications, including books and programs for the Theatre Alive literary series she cofounded with author Brian Brett.

The photo exhibit in the program room features some of the images from her new book, including those of lovely green, stony places in Ireland and England that speak to Hayes? connection to her ancestry. There are also some interesting examples from photo series in which Hayes? dreams played a strong role.

The photo show continues through December. Look for Labyrinth of Green at local shops or the library.

For more on this story, see the Dec. 11, 2019 issue of the Gulf Islands Driftwood newspaper, or subscribe online.

Articles: 2 Articles for this author
The Choreography of Desire (Rainbow $17.95)
Review


In The Choreography of Desire (Rainbow $17.95), Diana Hayes seeks to explore the links between visual imagery and print, using the interplay of poetic text and photographs. Some of the photographs, though stagy, have a haunting quality, less sensual than surreal. If the poems strike me as not entirely successful, products of the world of fancy, rather than the burning, transformative world of the imagination, it may be because they are too cerebral.
A potentially fine poem, "Dancing the New Moon, New Year's Eve,"; celebrates to considerable effect our animal vitality, the ground-swell of sex that drives us; but it is hindered by a too-rational syntax and certain clichéd figures of speech-";Eyes like mercury,"; "star-drenched sky,"; and "world of flesh.";
As a result, we are not drawn into the erotic moment, but pulled back and asked to admire the poet's verbal cleverness. Although the poems would benefit from being more playful and dramatic and less self-explanatory, there's still something very appealing about Hayes's aims here, and the consciousness at work in the poems.
1-55056-638-5


Diana Hayes is an adventurer, her poetry a testament to her capacity to take enormous emotional and physical risks. Her poems leap into the unknown; her dauntless determination follows them there. She can hear "signals cast in blood to prove we live only once, must follow this urge,/ if that be flesh or verse or dust.";
The work of Diana Hayes, who lives on Salt Spring, speaks at once of both our need to adventure in the world and our urge for home, the local - our place here. "Who would not return to their home, lifted by ancient river/ to be given back the gift of breath?"; Her book of poetry, This is the Moon's Work: New and Selected Poems, brings us visions of our world, centered very much here on this beautiful island, surrounded by our beloved waters, and yet she reminds us of how much we are enticed, enveloped, and enchanted by other lands and enormous sky. Hayes traverses mysteries within her body, of whose glories and failures she writes bravely; she subtlely invites her readers to explore themselves and their worlds with as much courage as she has done, her whole writing life. "Moving to the far ends of the Earth/ as we do, trailing our bits of root,"; her poetry points always toward the depths of the unknown and perhaps the unknowable, often represented as the sea: and yet Hayes without fear beckons us further and further down into our own blackness. "I will dance your fear to its own uncharted den/ surprise you with the comfort of not having maps .... Throw away the script.";
Navigating without charts: how surprising for the sailor. And yet, Hayes's imagery and themes keep tugging at us, forcing us to let go of the familiar, as she has been willing to do, beginning with the poetry of her young womanhood in 1974, to the present works which speak of a "body of desire,"; a body which, no matter how devastated, keeps asserting its needs, its presence. Hayes remains forever true to her sensuality, recalling her eight-year-old sexual self, "the hunger like a drum against my thighs,"; at almost the same moment that she writes of her post-hip replacement "former hip.... bones of titanium now to match my will."; She is not frightened at being without a map of the appropriate, instead writing her own way into sensuality, desire, and death, always ready to engage "a cauldron you enter at your own risk.";
Her readers can do no less, beckoned, summoned, ordered into the mysterious oceans who teach us everything we need to know. "Do not fight my tides,/ I am everywhere and will not let you down."; Hayes knows well what she commands: her imagination and her body force her to traverse every experience, to create her own map, to wrestle with adventure, and to tempt danger. Like Adrienne Rich, she is ready to dive into the wreck. For those of us who live here, surrounded by seductive waves, waters, and wails of birds and seals, we can only be brave enough to do the same.