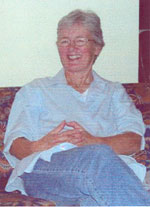 
Margo Hearne emigrated from Ireland in 1971. She lived in Toronto for two years then moved west, living in Banff for a year before settling in Masset in 1974. She fished for 19 of those years aboard the troller/gillnetter 'Lady Julia'.
She has written regular columns on birds and fish for local newspapers and ran a weekly community newspaper "The Morning Star" for a year. Her articles have appeared in the Guardian Weekly, Canadian Women's Studies, Peter Gzowski's New Morningside Papers and various local publications including the QCI Observer and Spruceroots. She raised over $1 million to build a bridge to restore the Delkatla Wildlife Sanctuary to its original estuarine status in 1995 and recently raised $350,000 to build The Nature Centre at Delkatla in Masset. She is the executive Director of the Delkatla Sanctuary Society. She and her husband Peter Hamel, work out of their home in Masset.