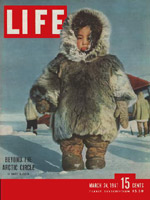 
Constance Helmericks wrote Down the Wild River North (Boston, Toronto: Little, Brown, 1968), an account of a mother and daughter travelling on the Mackenzie River, illustrated by Michael Allen Hampshire. She also wrote Hunting in North America (Stackpole 1959) and numerous books about Alaska including The Last of the Bush Pilots (1972). She travelled extensively in the Arctic with Harmon Helmericks and their journeys were the subject for a cover story in Life magazine on March 24, 1947. The cover featured a photograph of a three-year-old 'Eskimo' boy in the Colville River Delta of Alaska. The result of the couple's two-year expedition was a coffee table book called We Live in the Arctic.