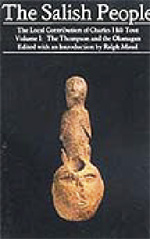 
"Although nothing is more wearisome than consecutive reading of collections of Indian texts, there is nothing wearisome in listening to the recital of these by the Indian himself."; - Charles Hill-Tout

Although he came to B.C. in 1891, he published a monograph on Later Prehistoric Man with the Royal Society in 1895, he recorded a performance of the Squamish Flood story by the blind Squamish historian Mulks in 1896, and he published an account of Mulks' rendition of the epic in 1897, Charles Hill-Tout is seldom regarded as the forerunner of Franz Boas. Despite his obvious intelligence and keen spirit, Hill-Tout failed to win the respect of Boas when they met in Vancouver in 1897 and this lack of trust seriously hampered Hill-Tout for the rest of his days. Even though Hill-Tout supplied Boas with five skulls, no reward for his services was made. Despite his repeated efforts to gain acceptance from New York and Washington, D.C., Hill-Tout was unable to secure any position that would allow him to work within the prestigious realm controlled largely by Boas. As a result, along with George Mercer Dawson, Hill-Tout grew to resent the continual exportation of the treasures to the United States so that anyone who wished to study Aboriginal history "must go to New York to do it.";

Hill-Tout worked mainly as a private school teacher in Vancouver before moving to a farm in the Fraser Valley where he studied the Marpole midden and the Salishan First Nations. Hill-Tout was made a Corresponding Fellow of the Royal Anthropological Institute of Great Britain in 1900 and a Fellow of the American Ethnological Society in 1908, but Boas continued to regard him in 1910 as someone with "a most remarkable ability of exasperating everyone with whom he comes in contact.";

Born in Buckland, England on September 28, 1858, Charles Hill-Tout had graduated from Oxford with "intellectual difficulties"; due to his belief in Darwinism. Hill-Tout did become a member of the Royal Society of Canada in 1913, and later became president of its Anthropological section, but his failure to win academic recognition meant his field reports were not accorded Library of Congress catalogue numbers. He died on June, 30 1944 in Vancouver. His correspondence, manuscripts, documents, clippings and photos from 1892 to 1941 were stored at UBC Special Collections. Decades later, Ralph Maud revived Charles Hill-Tout work and reputation, editing his anthropological field reports into four volumes under the general title of The Salish People (1978).

Hill-Tout, Charles. Notes on the Cosmology and History of the Squamish Indians of British Columbia (Ottawa: J. Durie & Son, 1897).

Hill-Tout, Charles. Oceanic Origin of the Kwakiutl-Nootka and Salish stocks of British Columbia and fundamental unity of same; with additional notes on the DÃ©nÃ© (Toronto: Royal Society of Canada, 1898; reprinted by Ye Galleon Press, 1997).

Hill-Tout, Charles. The Origin of the Totemism of the Aborigines of British Columbia (Transactions of Royal Society of Canada, 1901; reprinted by Anian Books, Lantzville, 1972).

Hill-Tout, Charles. Totemism: A Consideration of its Origin and Import (Transactions of Royal Society of Canada, 1903).

Hill-Tout, Charles. The Native Races of the British Empire: British North America: the Far West, the Home of the Salish and the DÃ©nÃ© (London: Archibald Constable & Co., 1907).

Hill-Tout, Charles. Man and his Ancestors in the Light of Organic Evolution (Vancouver: Cowan Brookhouse Ltd., 1925).