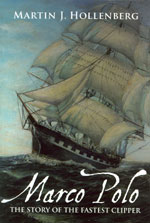 
A former dean of medicine at the University of Western Ontario and the University of British Columbia, Martin J. Hollenberg retired in 2001 to pursue an interest in tall sailing ships of the eighteenth and nineteenth century. His book, Marco Polo: The Story of the Fastest Clipper (Nimbus, 2006), provides an account of the first ship to circumnavigate the globe in less than 6 months. Built in Saint John, New Brunswick in 1851, the Marco Polo carried thousands of immigrants to the Australian colony and became world renowned for its recording breaking speeds, before it was wrecked on the shores of Prince Edward Island in 1883.