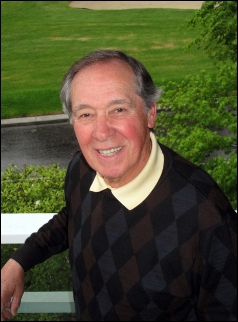 
Ted Hunt is as much a man of sports as he is of the study of history. The third generation Vancouverite earned degrees in History and Kinesiology at the University of BC and a PhD in History from the University of Washington. He is a member of the BC Sports Hall of Fame for his days with the BC Lions, Kats Rugby Football Club, the Vancouver Burrards Lacrosse Team and the Canadian National Ski Team.

He had already published two books about golf -- Ben Hogan's Magical Device (Skyhorse Publishing: New York $12.95) and Ben Hogan's Short Game Simplified (Skyhorse Publishing: New York $16.95) -- when he published In the Company of Heros (Granville Island Publishing $24.95). It is the fictionalized account of a rogue regiment of Czech Soldiers who are conscripted by the German Army to fight against the Russians during World War I. Facing the prospect of having to fight fellow Slavs, the conscripts rebel and switch sides to serve with the Czar's Russian Army. The leader of the regiment falls in love with the first woman to serve on Russia's Imperial Treasury Board. As the Bolshevik Revolution breaks out, she is ordered to hide the wealth from Lenin. The rogue regiment accompanies their leader's love interest in a train loaded with the treasury across war-torn Europe in a frantic attempt to prevent Russia's revolutionary government from confiscating it.

The story encompasses WWI, Lenin's Revolution, the Red and White Civil War, and the little-known War of the Interventionists (in which the USA, Britain, and France secretly invaded Russia to thwart Bolshevism).