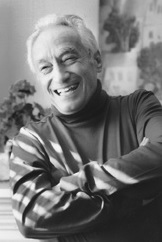 
Ardent Canadian nationalist and formerly prominent Western Canadian book publisher and bookseller Mel Hurtig lived in Vancouver for ten years from 2006 until his death on August 3, 2016.

He published the ground-breaking Encyclopedia of Canada when he operated Hurtig Publishing from Edmonton, having started in the book trade as one of Western Canada's foremost independent bookstore owners, opening the first of his three outlets in 1956. He sold his stores in 1972 to start his own imprint, Hurtig Publishers. in 1980,

Launched in 1985 at an estimated (by Hurtig) cost of $12 million, The Canadian Encyclopedia was a massive and risky project that none of the larger publishers in eastern Canada dared to undertake. The Calgary Herald's political columnist Don Braid called it "the single greatest publishing feat in the history of Canadian publishing."; Soon after he also launched an unprecedented, five-volume Junior Encyclopedia of Canada in 1990, he sold his publishing company to McClelland & Stewart in May of 1991.

"Mel Hurtig stands beside Jack McClelland as one of the publishers whose imagination and passion helped create the golden age of Canadian Literature from the 1970s to the 1990s,"; says published Howard White, who produced The Encyclopedia of British Columbia in 2000. "The country owes a lot to his uncompromising vision of Canadian independence."

Mel Hurtig also co-founded the Councili of Canadians and The National Party. After supporting Pierre Elliott Trudeau's rise, he ran unsuccessfully for the federal Liberals in 1972. He joined fellow, disenchanted nationalists Walter Gordon, Jack McClelland and Claude Ryan to establish the Committee for an Independent Canada (CIC) in 1973, serving as its first Chair, lobbying against foreign ownership. Five years after its demise, he helped to create the Council of Canadians in 1985, a similar organization that remained vibrant and vital as long as he lived.

Along the way he also served as president of the Edmonton Art Gallery and was inducted into the Order of Canada. He had six honorary doctorates from Canadian universities and was a recipient of the Lester B. Pearson Man of the Year Peace Award.

Mel Hurtig's seventh and final book, The Arrogant Autocrat: Stephen Harper's Takeover of Canada (2015), was self-published. Fiery, self-centred and charismatic, Mel Hurtig spent his final ten years in B.C. largely under the radar. He was a gallant, provocative and essential figure from the pre-internet era whose voice as an elder was too seldom heard considering all he did for his country.

The Betrayal of Canada

A New and Better Canada

At Twilight in the Country

Pay the Rent or Feed the Kids

The Truth About Canada