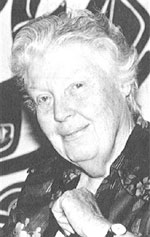 
Born on Nanuary 4, 1919 in New Denver, B.C., Joy Inglis earned her B.A. from UBC in 1941 and her Master's degree in Anthropology from UBC in 1964, having raised three children. Having worked with the We-Wai-Kai Band at Cape Mudge for 25 years she co-wrote the memoirs of 85-year-old Harry Assu, first elected chief of the Cape Mudge Band, for Assu of Cape Mudge: Recollections of a Coastal Indian Chief (1989). After that six-year project she continued to assist with the Kwagiulth Museum & Cultural Centre and published Spirit in the Stone: The Magic of Ancient Rock Art (1998). It explores the ritual and sacred aspects of approximately 90 petroglyphs on Quadra Island with a foreword by Nanaimo elder Ellen White and maps, photos and drawings by Hilary Stewart. Inglis also worked at the Centennial Museum in Vancouver for four years.