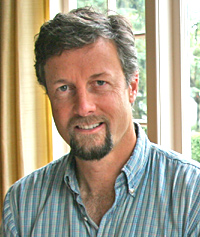 
As the leading Canadian authority on climate change, Mark Jaccard has been touted as "the sixth most frequently interviewed professor in the country," and dubbed "Canada's best mind on the environment," by Roy MacGregor.

A former chair of the BC Utilities Commission, Simon Fraser University economics professor Mark Jaccard received the Donner Prize for his book, Sustainable Fossil Fuels: The Unusual Suspect in the Quest for Clean and Enduring Energy (Cambridge Press, 2005). The $35,000 prize recognizes Canada's best public policy thinking, writing and research. Allan Gotlieb, former Canadian ambassador to the U.S. and chair of the Donner Foundation, presented the award to Jaccard in Toronto on April 27, 2006.

A professor in the school of resource and environmental management, and a globally-known analyst and commentator on energy issues, Jaccard was on the Donner short list in 2002, for The Cost of Climate Policy, co-written with SFU colleagues John Nyboer and Bryn Sadownik. Jaccard argues in Sustainable Fossil Fuels that fossil fuels can continue as a key energy source because the technological capability exists to use them without emitting pollutants.

Co-written with Jeffrey Simpson and SFU researcher Nic Rivers, Mark Jaccard's Hot Air: Meeting Canada's Climate Change Challenge looks at the political hurdles that have prevented Canada from meeting its planetary obligations regarding global warming, as well as possible solutions that include the SIMS planned simulation system, developed by Jaccard and implemented around the world.

Sustainable Fossil Fuels: The Unusual Suspect in the Quest for Clean and Enduring Energy (Cambridge Press, 2005).

The Cost of Climate Policy (UBC Press). With John Nyboer and Bryn Sadownik.

Contrary to popular belief, fossil fuels are not going the way of the dinosaur, says SFU professor and energy expert Mark Jaccard.

Forget the commonly held view that fossil fuels are on a downward slide given supply scares, rising costs and environmental concerns. Jaccard predicts that oil, gas and coal will still satisfy 58 per cent of the world's energy needs in the year 2100, fueled in part by growth in nations such as China.

Jaccard's forecast is detailed in his latest book, Sustainable Fossil Fuels: The Unusual Suspect in the Quest for Clean and Enduring Energy (Cambridge Press, 2005). The book is now available in Canada. It has also been launched in Britain and the U.S.

Jaccard says fossil fuels can be used with lower environmental impact or risk. They can be converted into clean forms of secondary energy - electricity, hydrogen and cleaner-burning synthetic fuels - in processes that capture and store the carbon that we don't want to reach the atmosphere, in the form of CO2 emissions.

"The costs of doing so, with technologies that are already applied in the economy for other purposes, are likely to be competitive with the usual suspects for clean energy - wind, solar, hydropower and biomass," he says.

"When all of these options are compared without prejudice, fossil fuels, the 'unusual suspect', are likely to retain a significant role in the global energy system through this century and far beyond, and the transition toward renewables and perhaps eventually nuclear will be gradual."

Despite having pledged to reduce Canada's green-
house gas emissions by 6 percent below 1990 levels under the Kyoto Protocol, our emissions have since gone up by nearly 30 percent, making Canada the worst performer of all Kyoto signatories.

We are not only failing to move forward on one of the most pressing issues of our time, we are actually going backwards.

This power trio has detailed the poor planning, ill-advised policies and political posturing that have plagued Canada's climate change policies since the Mulroney years-the Kyoto Protocol on climate change only being the most visible manifestation of such failings.

From Hot Air, we learn Canada's negotiations at the Kyoto conference were never quite grounded in reality. When Jean Chrétien first sent delegates to Japan, his instructions were to "stay slightly ahead of whatever commitment the Americans might make."; Whether that target was actually attainable was immaterial, Canada's image within the international community-and, by association, the legacy of Jean Chrétien-were foremost.
At Kyoto, it was imperative that Canada appear more virtuous than the United States.

At first, everything went as planned. Having previously spoken with US President Bill Clinton, Chrétien anticipated a modest American commitment somewhere between zero and two percent-prompting Canada to announce a slightly higher target commitment of three percent.

But the entire negotiating process was turned on its head when Vice-President Al Gore arrived and stunned delegates by announcing the US would commit to a seven percent reduction in greenhouse gas emissions.

Canadian negotiators were sent scrambling. In an attempt to save face, Canada's target was arbitrarily upped to six percent. No serious studies regarding the economic impacts of the commitment or even how such reductions could possibly be achieved were ever considered.
When the United States later withdrew from the Kyoto talks under George W. Bush, Canada was left out to dry with a highly ambitious target, and no roadmap to get there.

According to the authors of Hot Air, the reasons for Canada's failure to meet its overly ambitious Kyoto target, or make any progress on the climate change front, are varied. Our population and economy are growing much faster than most of Europe, we have more urban sprawl, a greater reliance on cars, a cold climate, and, perhaps most significantly, a booming oil and gas sector.
Even with the best of intentions, fully realizing a six percent reduction would have been an enormous feat.

Making matters worse, genuine political will was, and continues to be, sorely lacking in Canada. The decision to ratify Kyoto was made almost unilaterally by Chrétien. In doing so, he not only infuriated provincial leadership and his federal opposition, but also alienated his own political cabinet. He committed Canada to an agreement that few politicians after him felt truly obliged to fulfill.

The most crucial problem, however, is described at the core of Hot Air: Every Canadian administration, from Mulroney through to Harper, has relied solely upon voluntary measures-opting for the carrot over the stick-an approach that consists throwing lots of money around and politely asking businesses and individuals to stop polluting.

Who remembers the 1-tonne Challenge? At a cost of 17 million dollars, ads featuring Rick Mercer appeared on televisions across the country, urging Canadians to reduce their carbon footprint by driving less and turning off more lights.
Polls later revealed that the ads were almost wholly ineffective, yet the 1-tonne Challenge continued to remain in place. For decades there has been much talk and billions of dollars spent through subsidies and similar public awareness programs, but Canada has very little to show for it.

The only solution, argue the authors of Hot Air, is to stop relying on the carrot and start wielding the stick. "Polluting behaviour must have a price, not in moral opprobrium but in financial terms.";

Whether it is strict regulations, carbon taxes, a cap and trade system, or some combination of all three, the approach must be compulsory and it must contain penalties stringent enough to bring about changes in behaviour. We can either accept that fact or continue to do nothing-the choice is ours. 978-0-7710-8096-8


Only a fool would say it would be easy. But some smart people say stopping climate change doesn't have to break the bank.

As long as we start early by introducing sensible yet aggressive policies and allow time for the market and society to gradually adapt, Mark Jaccard believes we could soon find ourselves living in a low-emissions future.

For an idea of what such an approach might look like, one need look no further than our own province, as B.C.'s new carbon tax is essentially the viewpoints of Hot Air put into action.
The new B.C. carbon tax was inspired in large part by Jaccard, a member of Gordon Campbell's Climate Action Team.

As one of nine members who contributed to the UN's Nobel-prize winning International Panel on Climate Change, Jaccard has also worked with the NDP and is fully aware of the political realities accompanying tangible action on climate change.
"No one should underestimate the political difficulties of imposing GHG taxes,"; he writes, "since high taxes of any kind, anywhere, are prime targets of outrage.";

Unfortunately, the right policy isn't often the most popular. So, looking for the bright side, at least the provincial government has been willing to court some unpopularity in order to face reality.

A former chair of the BC Utilities Commission, Hot Air co-author Jaccard received the Donner Prize for his book, Sustainable Fossil Fuels: The Unusual Suspect in the Quest for Clean and Enduring Energy (Cambridge Press, 2005).
For information about BC's Carbon Tax go to: www.bcbudget.gov.bc.ca