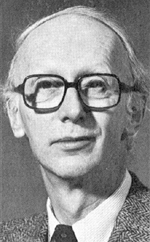 
Born in the U.S. on March 25, 1925, Sidney Wayne Jackman was a UVic history professor from 1964 onwards who became one of British Columbia's foremost historians.

Educated at Victoria High School, the University of Washington (B.S. 1946) and Harvard (M.A. 1948, Ph.D 1953, he edited The Journal of William Sturgis (Sono Nis), the seafaring account of an American who, at age 17 in 1799, kept a journal of his visit to the coast. His journal contains one of the first attempts at a phonetic dictionary of the aboriginal dialects. Jackman also edited At Sea and By Land: The Reminiscences of William Balfour Macdonald, R. N. (Sono Nis, $8.95), the naval service autobiography of the first British Columbia-born to be named cadet at Britannia. Macdonald served in the Pacific Rim, from Hawaii to China, and commanded one of the first two vessels of the infant Canadian navy. A Fellow of the Royal Historical Society, Jackman also published Vancouver Island (from Stackpole Books in Harrisburg, Pennsylvania and Griffin House in Toronto, in 1972), a work dismissed by Walter D. Young in BC Studies for its "schoolmasterish tone and constant conversion of dollars into sterling... the reader is cautioned that the facts are dated in many cases, the photographs in some instances antique."

Other books by Jackman include Man of Mercury (1965), Portraits of the Premiers: An Informal History of British Columbia (Gray's, 1969), The Men At Cary Castle (1972) and Nicholas, Cardinal Wiseman (1977). As well, he edited The English Reform Tradition, 1790-1910 (Prentice Hall, 1965). Jackman served in World War II and he received an honorary doctorate from the University of Lethbridge in 1989. He was a member of the Board of Directors of the Victoria Art Gallery (1965-1970) and a member of numerous learned societies. He also taught abroad.

Review of the author's work by BC Studies:
The Men at Carry Castle
Portraits of the Premiers
Vancouver Island