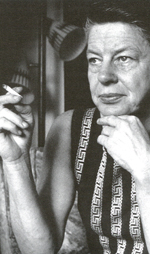 
Born on December 11, 1922, Pauline Jewett attended Queen's University (B.A., M.A.), Harvard University (Ph.D Political Science) and the London School of Economics. She later taught at Carleton University in Political Science and served as Director of the Institute of Canadian Studies. As an admirer of Lester Pearson, she was elected as a Member of Parliament for the Liberal Party in 1963. Disenchanted with Pierre Trudeau and the imposition of the War Measures Act, she quit the Liberal Party and joined the New Democratic Party. She was an NDP MP for New Westminster-Coquitlam from 1979 until 1988. She served as president of the Simon Fraser University from 1974 to 1978. As such, Jewett was the first woman president of a Canadian co-educational university. Jewett later became Chancellor of Carleton University in 1990 and was appointed to the Privy Council just prior to her death from cancer on July 5, 1992. Created in 1987, the Pauline Jewett Institute of Women's Studies at Carleton University conducts research and houses the Carleton University-University of Ottawa Joint Chair in Women's Studies, established by the Secretary of State Women's Program in 1985.

To Change the World: A Biography of Pauline Jewett (Irwin Publishing, 1987) Doris Andersen