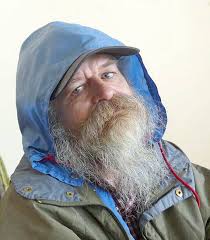 
"I write because the rich and the beautiful and the connected have the monopoly on communication access and distribution,"; says John La Greca, in an addendum to his first collection of poetry, Homeless Memorial (Ekstasis $23.95). At 64, the long-time Vernon resident has been a client of government services since age thirteen. His first mentor was the painter Sveva Caetani, for whom he worked as a gardener, followed by Harold Rhenishch. The "El Greco"; of Vernon has been described by his publisher as Canada's Charles Bukowski. "Some six-year-old kid / Look at me in the library / I gave him the finger. / He smiled back at me. / I think I made his day."; 978-1-77171-275

I?ve been a client of government social agencies since I was 13. My grandmother evicted our family just before Christmas that year. My mother?s mental illness was causing antagonisms. It didn?t help that my father assaulted my mother?s brother while he was drunk?. I cracked up when I was 17. I took a year off after Grade Eleven. I was finding that I was a painter and a writer.?john la greca, at age 64

John La Greca was literally tearing his hair out for years due to an obsessive compulsive disorder. He briefly attended four universities: UBC, Okanagan College, Guelph, McGill. Eventually, having been homeless, he shared his poems with his sister, his mentor the artist Sveva Caetani (who employed him for fifteen years as her gardener in Vernon), and Vernon Library?s poet-in-residence, Harold Rhenisch who helped him compile his first book.
Several of his poems tell stories of railway workers and machine operators with whom he occasionally worked, but most are vignettes, character sketches, and conversations featuring his fellow homeless citizens?vagrants, addicts, hookers.

The latter included Brandi, ?the most confusing woman I have ever talked to,? who wanted domesticity but suddenly died of natural causes, or cancer, or maybe it was AIDS. ?Brandi?s dead, and she?s still in my head./ She?s the gift that keeps giving back.?

Greca?s poet?s voice is matter-of-fact and colloquial but highly literate, ?cosmopolitan and democratic.?

Poems in Homeless Memorial include, Terry Gilliam?s Revenge, or Move Over Montezuma; The Killer Breasts of Tchaka?s Body Guards; Waiting for Godot on St. Catherine Street One January Evening; Who?s Afraid of Virginia Woolf Now?; Margot Kidder and Former Topics of Conversation; Woody Allen, Now That He is near Death; A Moment with Dostoevsky before I Chainsaw the Crucifix Up above Bella Vista; On the Song ?I Will Always Love You.?

The last is one of my favourites, a thoughtful, felt and tightly written comparison of Dolly Parton?s original with Whitney Huston?s cover version from the film The Bodyguard. I think the poem would move me even if I did not know that Dolly Parton is alive and well, and Whitney Houston isn?t.
The long poem Homeless Memorial, which gives the book its title, refers to a rock placed in Polson Park in Vernon ?where he mostly lives?and an annual civic ceremony organised by the well-intentioned First Baptist Church as a means of ?enabling our homeless population to remember friends and loved ones who have died in the past year.?

The poet listens to and tells people?s stories, and offers no solution but is sure the memorial is not it. ?The homeless deserve more than memorials, / Photo-ops or editors using them as political footballs / To beat both sides of the issue/ without proposing attacks on the problem/ And solutions that have a political will.?

John La Greca?s book has been publicised and celebrated in Vernon and around the province. He emerges from his writing as very much an individual, but also on the edge of a community or several communities, each in need of what he has to offer.

He reflects, ?I have always felt denied as an outsider. In the prison and the psychiatric ward, I was seen as a delusional person with grandiose thoughts about his own value. I always knew that I could contribute.?
9781771712750

A retired librarian and co-founder of the bookstore at Page?s Resort & Marina, Phyllis Reeve lives on Gabriola Island where she continues to interfere in the cultural life of her community.