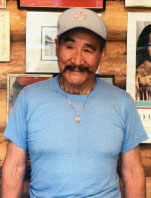 
"The best ship you can jump on is friendship." -- Peter John

Born on July 20, 1925 in the Carrier village of Sheraton on Burns Lake, located about 25 kilometres east of the town of Burns Lake, Peter John told the story of his life to Burns Lake Secondary School teacher-counsellor Doris Johnson for Highu Yalht'uk / Elders Speak: The Story of Peter John (Burns Lake: School District #55, 2000), developed with the assistance of the Burns Lake Band. The son of a trapper and muleskinner, he was taken to Lejac School east of Fraser Lake in 1935 to learn English. At age 12, he had to rise every morning at 4 a.m. to milk cows for 45 minutes. "I soon learned there was a benefit to it. Whenever I was hungry, I could drink fresh milk, straight from the cow. I would fill my mouth about a dozen times before my stomach was filled. I never let one cow get away from me without feeding me. I was the healthiest kid in the school! They didn't know why, and I didn't tell them." He worked briefly for the CNR before working at sawmills throughout northern B.C. for most of his life. He retired to Burns Lake where he became involved in the B.C. Association of Non-Status Indians (BCANSI) and the Burns Lake Native Development Corporation with George Brown. In the 1970s they persuaded Babine Lake Forest Products to build a sawmill at Sheraton and employ more than 100 Aboriginal workers. In the late 1970s Peter John changed his life by successfully renouncing alcohol and cigarettes. "I asked God to help me," he said. "If I hadn't quit smoking and drinking, I'm sure about it: I wouldn't be here today. I'd be living on the streets in Prince George or Vancouver or somewhere. I'd be looking in dumpsters for things I could sell to get booze, to get drunk. Believe me, many people that I loved in this life are gone because of cigarettes and alcohol." To preserve his Aboriginal language, Peter John became increasingly active in the Yinka Dene Language Institute.