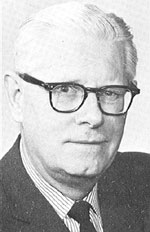 
F. Henry Johnson wrote a biography of John Jessop, the first Provincial Superintendent of Education (from 1872-1878), sometimes called the founder of the B.C. school system, who played a role in establishing the free, non-sectarian school system of British Columbia. One of the first Overlanders from Ontario, Jessop had trained under Dr. Egerton Ryerson who shaped the Upper Canada and Ontario school system as its superintendent from 1844 to 1876. Having attended Normal School in Toronto and taught in Ontario in the 1850s, Jessop arrived penniless in British Columbia and worked as a one-room-school teacher. "Granted," wrote reviewer Robert M. Stamp in BC Studies (Summer 1972), "Jessop was the most important schoolmaster in colonial Victoria during the decade, and he did participate in the educational debates. But how could an individual possessing relatively little social and political influence possibly play the most crucial role in determining the province's single most important educational decision?" Stamp contends that Johnson overlooked the importance of newspaper editors Amor De Cosmos and John Robson, plus Governor Seymour, and the relative absence of an influential Roman Catholic constituency in Victoria at the time. In the biography Johnson includes excerpts from Jessop's journals of an overland trans-Canada journey in 1859, his Cariboo prospecting adventures in 1860, his political gambit of 1867 and his trips as a school inspector in the 1870s.

F.H. Johnson was Director of the Elementary Division of the Faculty of Education at the University of British Columbia. He also edited the Canadian Heritage Series of school textbooks; published A History of Public Education in British Columbia (UBC Press, 1964); and he coordinated the publication of Kamloops, 1812-1937: A History, Compiled and Illustrated by the Junior Historical Club of the Kamloops High School (Kamloops: [s.n.], 1937). Johnson received his B.A. and M.A. from UBC prior to gaining his Ph.D from the University of Toronto. He was a president of the B.C. Historical Association and of the the Canadian Association of Professors of Education.

Review of the author's work by BC Studies:
John Jessop: Gold Seeker and Educator

A History of Public Education in British Columbia (UBC Press, 1964)