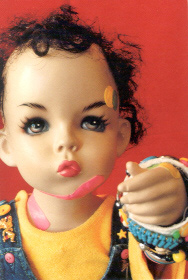 
Nine-year-old Paxton and his sister have moved into Lucy and Delphine's home so there can be more money for rent. Paxton is a pincher, an unstoppable bully. Bonnie, his sister, is a poker. Both use bad words. Their secretive cruelty gives nine-year-old Delphine and her doll Lucy nightmares. "They were angry children with big elbows,"; says Lucy, the narrator of Diane Jarvis Jones' The Lucy Doll ($13.95), "and sneaky as snakes."; Lucy starts to lose her hair. Incapable of taking any action for herself, the passive Lucy must suffer until Delphine finds the courage to confront Paxton when he tries to push her down the stairs. "You're not going to break me,"; Delphine declares, "as if I am a doll.";

Like Jones' two preceding books, The Lucy Doll was written to help primary school children talk about some of their darkest feelings. It illustrates the secret torment that children can endure for months, even years, when they are abused. "Little children pull their hair out,"; says Jones. "Big children get drunk."; To test The Lucy Doll, the cabbie turned publisher placed 23 band-aids on a three-foot mannequin and visited Charles Dickens School. "I had my hairdresser glue hair on her,"; says Jones, "I bought the clothes, I sewed the buttons on. Kids were fascinated by her. She's pretty and she's hurting. They start asking questions. That's what it's all about."; Jones chose unusual names for the story's main characters because she didn't want any kids in her audiences to be embarrassed or teased. Her books take two years to write, hand sew and photograph. She presents her instructional stories in conjunction with her button art exhibits.

Jones' first self-published book, Aunt Mary Buttons (Button Books $12.95), concerns a beloved aunt's terminal illness. Her second, Larry, Red and Blue (Button Books, 1997 $12.95) concerns the sudden death of a playmate. Both are written with the voice of a child. Both delve carefully but deeply into the shock and sadness children can feel when a loved one dies. "Larry was seven when he died, and I had only turned five,"; writes the narrator Trixie, "Now I'm nine, but he'll always be seven. It's really weird. I still get goose bumps thinking about Larry, but it's time to tell you the whole story anyway."; Trixie feels sorry and angry about what happened to her best friend but it's not until Caitlin Rose, her arch rival, tricks her into talking about Larry, that Emily starts dealing with her pain and discovers the true meaning of friendship.

Each of Diane Jarvis Jones' titles feature original 'button art' hand sewn for each story. They take months to complete before they can be photographed. Made with recycled jewelry and junk, they range in size from 55 X 150 cm to 150 X 150 cm. Jones is a taxi driving grandmother who dedicated her second book to her 91-year-old mother who, she says, "was saddled with a maverick child, a dreamer, a drifter, a Gemini. Over time a firm and fast friendship developed, one that God continues to smile upon to this very day. And each day I give thanks.";