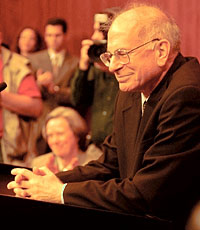 
Born in Tel Aviv, Israel in 1934, Daniel Kahneman and his wife Anne Treisman came to teach at the University of British Columbia in 1979. He later received the Nobel Prize for Economics in 2002 with co-recipient Vernon L. Smith for having "integrated insights from psychological research into economic science, especially concerning human judgment and decision-making under uncertainty." A citizen of both the United States and Israel, Kahneman left Vancouver in 1986 to teach at Berkeley in California, where he had earned his Ph.D in 1961. He was later affiliated with Princeton University.