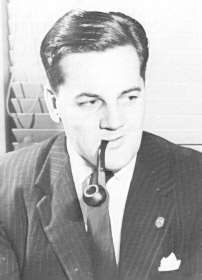 
"In any world menu, Canada must be considered the vichyssoise of nations--it's cold, half-French, and difficult to stir." -- Stuart Keate

Keate published a memoir of his 45 years in the B.C. newspaper business, Paper Boy (Toronto: Clarke, Irwin, 1980). Born in Vancouver in 1913, he graduated from UBC in 1935 and worked as a sports reporter for The Province. During World War II he was an information officer in the north Atlantic and Pacific theatres. He became Bureau Chief of Time Inc. in Montreal from 1948 to 1950, then publisher of the Victoria Daily Times from 1951 until 1964. He published the Vancouver Sun from 1964 to 1978.