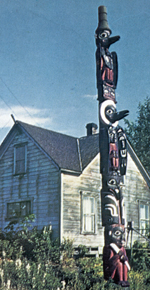 
Born in Tenino, Washington in 1900, Keithahn saw his first totem pole at an exhibition in Seattle in 1909. He later worked for the Indian Service of the U.S. in Wrangell, teaching totem carving and Indian culture at the Wrangell Institute. He also taught school at the Inuit village of Shishmaref and the Indian villages of Kake, Hydaburg and Wrangell. In 1941 he became Curator of the Alaska Historical Library and Museum in Juneau. As the long-time director of the Alaska Museum, wrote one of the first popular introductions to the totem poles in British Columbia and Alaska, Monuments in Cedar: The Authentic Story of the Totem Pole. First published in 1945, it was revised and expanded by Superior Publishing Company of Seattle in 1963. Keithahn was a member of the American Anthropological Society, Fellow American Association for Advancement of Science and Pioneers of Alaska.