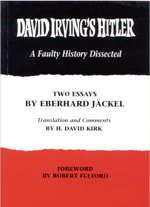 
To counteract revisionist tracts of David Irving falsifying matters regarding the Holocaust, H. David Kirk translated and published two essays by the German historian Eberhard Jackel, and provided his own commentary, in David Irving's Hitler: A Faulty History Dissected (Ben-Simon, 1993), with a foreword by Robert Fulford.

In particular, Jackel negated and disproved Irving's absurd claim that Hitler was unaware of the Shoah. In doing so, Jackel quoted a prophecy made by Hitler in a Reichstag speech in January of 1939 when he said: "I shall once again be your prophet: if international Jewry with its financial power in and outside of Europe should manage once more to draw the peoples of the world into world war, then the result will not be the Bolshevization of the world, and thus the victory of Jewry, but rather the total destruction of the Jewish race in Europe." Hitler's wartime speeches repeatedly cited this prophecy.

Born into a Jewish family in Rhineland, West Germany in 1918, Dr. H. David Kirk was a B.C. publisher based in Brentwood Bay. B.C. His small operation specializing in children's books and Judaica was created in 1984 after David Kirk retired from teaching in the University of Waterloo's sociology department. He and his wife Beverley ("Beve") Tansey set up their own press in order to re-publish Kirk's own previously published book Shared Fate, after the title had gone out of print. Having adopted four children, Kirk had examined the social and psychological meanings of adoption since the 1950s. His seminal work on adopted persons' civil rights, Shared Fate (first published in 1964), remained available in hardcover for 18 years and became available in paperback, as did Adoptive Kinship: A Modern Institution in Need of Reform. Kirk's Exploring Adoptive Family Life was re-published when he was aged 70 as Exploring Adoptive Family Life: The Collected Adoption Papers of H. David Kirk (Ben-Simon, 1988). Arguably, the most noteworthy book published by Ben-Simon was Lillian Boraks-Nemetz' Holocaust novel for young readers, The Old Brown Suitcase: A Teenager's Story of War and Peace, in 1994. H. David Kirk died in Kitchener, Ontario on December 14, 2019, at the age of 101 years. 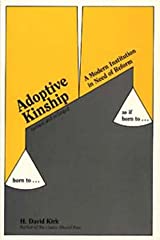 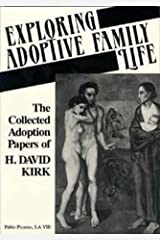 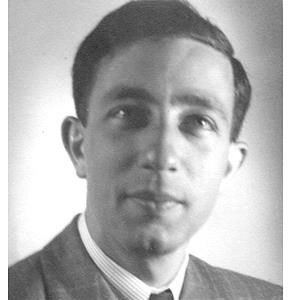