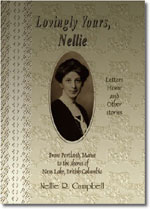 
George Campbell immigrated to Canada in 1909 and settled in Saskatchewan. Nellie Richner, also an American and a teacher, after meeting George and corresponding with him, left Maine in 1920 and travelled to his homestead. Nellie Campbell's copious letters, mainly written to her beloved Auntie Marie, and also to family members, were passed down to various family members. Sandra Hyslop and Pat Klassen, two grandchildren, compiled the majority of their grandmother's letters and articles for Lovingly Yours, Nellie (Trafford, 2004), a self-published volume about settling Saskatchewan and British Columbia. Pat Klassen was born in Prince George on February 22, 1955.