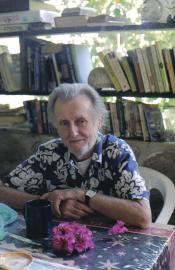 
Born in Minneapolis in 1935 and raised on his family's dairy farm, Ross Klatte is the son of a man born in Moose Jaw, Saskatchewan to American-born parents. He knew what he wanted to be in life--a writer--after reading a juvenile biography about Jack London during his senior year of high school in 1952. Attending St. Thomas College in St. Paul, he was introduced to the work of Ernest Hemingway. In January of 1955, the Klatte family sold its family farm and Ross Klatte enrolled in boot camp for the navy. "I'd joined the Cold War Navy not to keep the world safe for democracy but just to see it." He earned a B.A. in Journalism from the University of Minnesota and became a reporter for the Chicago Tribune. Klatte worked for other publications before he and his wife immigrated to Canada in 1971 and homesteaded near Nelson, B.C. After winning first prize in a CBC Literary Competition for 1990, he traced his family roots from Quebec and Saskatchewan to Minnesota for his poignant family farm memoir, Leaving the Farm (Oolichan, 2007). $22.95 0-88982-237-9