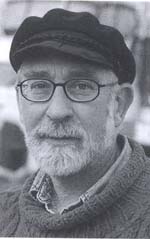 
Tom Koch is the author of The Wreck of the William Brown: A True Tale of Overcrowded Lifeboats and Murder at Sea (D&M 2003 $35). See review below. Koch is an adjunct professor of gerontology and a forum associate at the David Lam Centre for International Communications at Simon Fraser University. He also wrote Mirrored Lives : Aging Children and Elderly Parents (Praeger Publishing, 1990) and A Place in Time: Caregivers for The Elderly (Greenwood Publishing Group, Incorporated, 1993).

Articles: 1 Article for this author
The Wreck of the William Brown
Review (2003)


In 1841 an American ship carrying some 65 emigrants and 17 crew members from Liverpool to Philadelphia hit an iceberg at full speed in the North Atlantic ocean. The ship and 30 passengers went down. The remaining passengers and crew crowded into the only two lifeboats. Of these passengers in the lifeboats, 16 were thrown into the ocean by the crew-their motivation being to save the rest. Not one member of the ship's crew died.

Captain Harris of the William Brown did not stay on his sinking ship as was the naval tradition. In fact, he was one of the first ones into the smaller "jolly boat,"; refusing to accept more than ten other people (all crew members). After surviving the night tied alongside the bigger "longboat"; which held more than 30 passengers and crew, he split from the overcrowded lifeboat the next day.

Upon his departure, Captain Harris extracted promises from the crew in the longboat to take orders from his first mate and he gave convoluted instructions to lighten the boat if need be. Confusion abounded. The first mate put in command, turned out to be an inept navigator who didn't believe the lifeboat could follow that of the Captain's through the icy waters and onto Newfoundland, some 300 kilometers away. Nor could he envision being rescued.

That's the context for Tom Koch's The Wreck of the William Brown: A True Tale of Overcrowded Lifeboats and Murder at Sea (D & M $35), a multi-leveled story of how one tragic shipwreck was the genesis for our modern concept of "lifeboat ethics";-how do you choose who dies and who survives when resources are limited and insufficient for all?

Few documents or photos were available for research. The William Brown was one of many ships that met a tragic fate due to unusually poor weather in the spring of 1841. Koch, an SFU professor with a passion for maritime history, has nonetheless delved into the William Brown's back story in order to focus on "how people get caught up in and destroyed by social systems that are supposed to protect them."; This is in keeping with one of Koch's previous books called Scarce Goods in which he examines how "lifeboat ethics"; has been applied to organ transplantation.

The Wreck of the William Brown is a story with all the elements of intrigue; cover up, political scandal and manipulation of journalists and lawyers to affect just the right outcome for the powers-that-be. At stake was a thriving international shipping industry and The Great Migration of citizens from England, Ireland and Scotland to North America.

And there's also a hero.

One seasoned sailor named Alexander William Holmes saved a child who was going to be left behind on the William Brown, reuniting that child with her family in the longboat. He also gave away his outer clothing, piece by piece, to the freezing passengers. When the first mate became increasingly distraught and unable to take command, Holmes took control of the longboat. His one grave error, made by honouring his promise to obey the first mate, was to participate in the murders of the passengers.

One night a hastily repaired plug came undone without anyone noticing. The longboat was taking in water at a rate difficult to bail and it was believed that in order for the majority to survive, a few needed to be sacrificed. This decision was premature because the survivors were rescued by a French vessel shortly after the last two passengers were unceremoniously thrown to their deaths.

Understanding immediately the impending negative judgment and ethical uproar that Captain Harris and crew of the William Brown would have to face, the captain of the rescuing ship spun their story favourably in his written report which he sent ahead to France (where they were headed) with the first mate of the longboat. Captain Harris and his crew spent five days at sea until they, too, were spotted and saved by a French Canadian fishing vessel.
The details of this unfortunate shipwreck turned morality tale are intricate, and without ruining too much of Tom Koch's fascinating, page-turning story, a trial ensued, some survivors (including those who had watched crew members kill their loved ones) took the stand, and Alexander Holmes became the scapegoat as the only crew member accused of murder.

The Great Migration continued, many more men and women were lost to the unforgiving North Atlantic, though none were deliberately killed in the manner of the William Brown again, and nothing much was learned from the whole horrific ordeal. Seventy-one years later, the Titanic went down in pretty much the same area, for the same reasons, and we all know the story of half-full lifeboats containing (mostly wealthy) people reluctant to go back for more passengers.

It was not until after the Titanic went down in 1912 that out of necessity and demand the speediest shipping route via Newfoundland was changed to carry vessels slightly south on a slower route to avoid icebergs. Each ship was also required to carry sufficient lifeboats for the number of passengers aboard.
Koch's final chapter entitled The Legacy is where the philosophical discussion begins-and one wishes it could have been longer. Having been used as a precedent in various maritime legal cases, the case of United States vs. Holmes has made its way as a defense into more general legal situations. As recently as the late 1990s it was evoked by Robert Latimer's appeal lawyers after he was convicted of killing his disabled daughter. It is the current wisdom behind the idea of "triage,"; a method for dividing injured people into groups based on their need for medical treatment when resources and emergency personnel are limited.

"The problem with the simplified story of the William Brown and the metaphor of 'lifeboat ethics' it has bequeathed us is that it ignores the causes of scarcity, the generative conditions of disaster. It prohibits important questions from being asked (why was there only one longboat on board?) under the guise of considering real and important concerns (who will be thrown overboard?). The metaphor assures we will consider preventable tragedy as a theological judgment, that we will blame God for the heat wave that cooks us, the winter cold spell that freezes the homeless, the dam that breaks and drowns townspeople who could not afford to live away from the riverbanks. That one of these events is necessary-and none necessarily the act of a capricious deity-is a fact hidden by the stories we tell ourselves about the inevitability of it all.";

Tom Koch's final conclusion, whether applied to hunger, medicine, homelessness, or education, is that we do not have to be in the lifeboat at all. "The moral of the William Brown should be that we can make sure there are enough lifeboats for all, and perhaps that we can avoid the necessity of their use. In this way, the metaphor of the lifeboat stands not as an excuse but as an indictment of the constructions that assure the scarcity that appears to pervade our world."; 1-55054-936-7