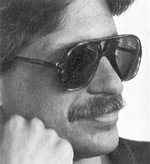 
Born in Vancouver in 1954, Krieger published cartoons in the Ubyssey newspaper at UBC, the Vancouver Courier and the Jewish Western Bulletin before becoming the permanent editorial cartoonist at the Vancouver Province in the late 1970s. His first collection, Krieger in the Beginning (New Star, 1981) has been followed by contributions to various books such as Count the Days: The 1990 Bill Vander Zalm Scandal Datebook (New Star, 1989), often with the proceeds of his recycled work going to charity (Vancouver Food Bank).