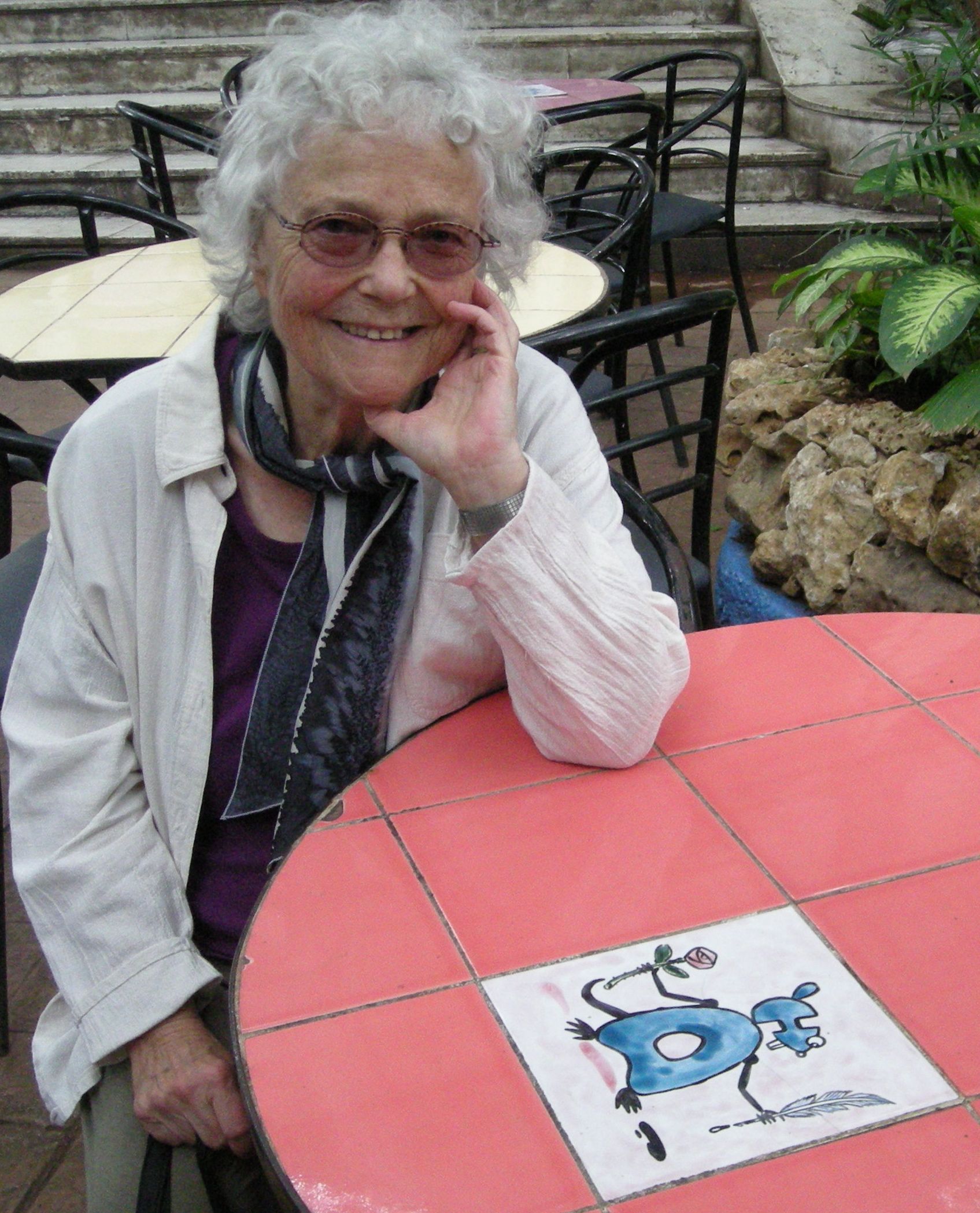 
In 1993, Talonbooks released a final volume of George Ryga's posthumous writing, Summerland ($19.95), edited by Ann Kujundzic. This final book from Ryga is a collection of essays and excerpts that reflects Ryga's deeply political nature and his abiding sympathy for the downtrodden.

A former resident of Summerland, Ann Kujundzic of Victoria was a guiding force within the George Ryga Society until it was disbanded in 2014. She is one of the few people who have a copy of George Ryga's first book, Song of My Hands & Other Poems, privately published in 1956.

Born in 1929 in Dysart, Scotland, she was married at age nineteen to artist Zeljko Kujundzic. They immigrated to Canada and raised five children, helping to establish the Kootenay School of Art in Nelson.

New Ground: A Memoir of Art and Activism in BC's Interior
by Ann Kujundzic, with a foreword by Mary Schendlinger

Reviewed by Luanne Armstrong in The Ormsby Review.

I love memoirs like this. And really, we need so many more of them. So many stories still remain to be told, but are slowly being lost in time, left behind in the misty blue mountains of the B.C. Interior.

Ann Kujundzic was one of the many women who shaped such communities through their hard volunteer work, their devotion to both the idea and the formation of a sense of community, whether through art, or potluck dinners, or community organizations, or all of the above.

Ann Kujundzic grew up in an unconventional family in Edinburgh, Scotland. Her mother believed in naturopathic medicine and her parents supported their family by taking in boarders from a naturopathic clinic. Ann went to school in both Scotland and England and met her husband after he moved from Yugoslavia to Scotland, got a job as an artist, and boarded at her parents’ house.

Eventually, Ann and her husband, Zeljko Kujundzic (1920-2003) moved from Scotland to the B.C. interior city of Nelson in 1960 because they believed there would be better and more open opportunities to make art in Canada.

They had three children and Ann was pregnant with their fourth child when they arrived in B.C., settling briefly in Cranbrook before moving on to Nelson. They settled in Canada, and in the Kootenays in particular, at a time of great social and political ferment, into which they immediately threw their efforts.

During their Nelson years, Ann and Zeljko helped found the Kootenay School of Art, where Zeljko taught. Initially Ann stayed home with their four children (eventually five), and she also became involved in peace issues and helped found a chapter of the international peace group, Voice of Women.

Ann writes that the whole story of the Kootenay School of Art remains to be told and as far as I can tell, this is very true. Ann and Zeljko also built a house in the Quaker community of Argenta, at the north end of Kootenay Lake.

Political turbulence over the direction and administration of the Kootenay School of Art eventually forced Ann and Zeljko to move to Kelowna, where Zeljko got a job teaching school. They both got equally involved in the arts community there. They bought an old church and turned it into a vibrant Arts Centre. They made friends with playwright George Ryga and his wife Norma. Ann and Norma quickly became friends since they were both from Scotland, both married to artist husbands, and both struggling to bring up small children on a limited income.

Ann and Zeljko’s house was a constant whirlwind of artists and writers such as Patrick Lane coming in and out the door. During their Kelowna years, they were involved in various causes and concerns in Canada, and they travelled extensively in Mexico and North America.

But two artists with a houseful of kids, and a constant ongoing stream of visitors, is a hard structure to maintain. Ann also continued to study, make art, work at various jobs, plus care for her family.

Eventually, Zeljko was offered a job at Pennsylvania State University and Ann was clear that she didn’t want to live in the U.S., nor did she want to raise her children there.

At this point, their lives diverge, and Zeljko falls out of the narrative.

There are really two books here, the story of Ann, Zeljko, their family, and their huge community commitments; and then the story of Ann on her own, working as a massage therapist in Vancouver for twenty-five years and travelling extensively. I would have enjoyed hearing more about the first section, more about the kids and Zeljko’s career (see postscript below), more about what happened to other members of this vibrant family and the many organizations and initiatives they founded. The travel narratives are equally interesting but not as engrossing to me as much as the first part of the book.

Much of this history is scattered or remains within the memories of people who are aging quickly. Unfortunately, there is little incentive to collect it and no funding for research, and, because the books will probably have a fairly limited market, not a big incentive to publishers either. Huge kudos to Vici Johnstone and Caitlin Press for their ongoing efforts to publish B.C. stories and, in particular, B.C. women’s history. And many thanks to the great Mary Schendlinger for editing this book. We are fortunate that Ann, who is now in her nineties, brought this book to vivid life with her writing.

I am sure Ann’s path and mine might have crossed at some point, since I was also involved in peace work and in the Voice of Women, but at a much later stage. From her writing, it is clear that Ann was a determined, brave woman committed to making art, supporting artists, bringing up her children to think for themselves, always educating herself, and living as a self-determined person whose life and decisions were all her own.

This is a wonderful portrait of a deeply interesting woman living in a remarkable transitional and politically important time in B.C. I felt as if I were being told a story by a brilliant elder who shared so many of my own concerns. Thanks to all who brought this book into being.

Zeljko Kujundzic was a founder and director of the Kootenay School of Art in Nelson (now part of Selkirk College) from 1959 to 1963. After that, he and his wife Ann moved to Kelowna where they built an art gallery together. Eventually, Zeljko was hired to be head of the Art Department at Pennsylvania State University’s Fayette Campus where he worked from 1971 to 1982.

Zeljko was born in Subotica, Yugoslavia, October 23, 1920, where he began his art career. He received a master’s of fine arts degree from the Institute of Fine Arts in Budapest. After the Second World War, he moved to Scotland and met his first wife, Ann Kujundzic, there. He died at the age of 82 in Osoyoos. His artistic media included sculpture, clay, painting, printmaking, metal, stained glass and weaving.

He was commissioned to create the Thunderbird sculptures at UBC’s Thunderbird Stadium, and The Gate of Life, a 135-ton sandstone archway. This monument at the Jewish Community Centre in Uniontown, Pennsylvania is dedicated to remembering those who died in the Holocaust. His autobiography, Torn Canvas (Edinburgh: Richard Paterson, 1957) documents his early years and his experiences in the Second World War, including escapes from both the Nazis and the Russians.

Zeljko was survived by his second wife Elizabeth, his first wife Ann, and his children Laszlo, Kate, Claire, Judy, Andrew, and Natanis.

Luanne Armstrong has written twenty-one books. She writes young adult book, fiction, nonfiction and poetry. She mentors many emerging writers all over the world on a long term basis and in the last three years, has edited eight books through to publication. Her new book, A Bright and Steady Flame, The Story of an Enduring Friendship, was published by Caitlin Press in 2018. She is now working on a book of essays called, Going to Ground as well as a new book of poetry titled, When We Are Broken.