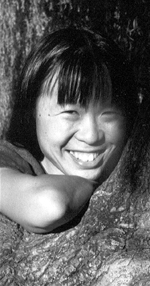 
Larissa Lai was born in La Jolla, California in 1967, grew up in Newfoundland and finished high school in Vancouver. She does not speak Chinese. She assisted in curating the film, video and photography exhibit Yellow Peril: Reconsidered and was a coordinator for SAW Video Co-op, an artist-run video production centre in Ottawa. She has also been a member of the Asian Canadian Writers' Workshop in Vancouver prior to moving to Calgary. In 1995 she received an Astraea Foundation Emerging Writers Award. She has travelled to southern China in search of her roots, once with her aunt Yuen-Fong Woon, a professor of Asian Studies at the University of Victoria, and once with her close writing friend Rita Wong.

Her first novel When Fox is a Thousand (Press Gang, 1995; Arsenal Pulp, 2004) was shortlisted for the Chapters/Books In Canada First Novel Award. It evokes popular Chinese films on the supernatural and traditional folktales with a twinned tale of two murders. After a maidservant is found dead under a tree in the ninth century, a young Taoist nun is executed for murder. An Asian woman is also found dead under a tree in Stanley, possibly the victim of racist violence or an unfortunate love affair. A fox appears, with the folklorist power to change into women in order to seduce, manipulate and teach lessons of morality. This fox meets the central contemporary character, Artemis Wong.

Lai's second novel Salt Fish Girl (Thomas Allen, 2003) also rebounds from China. It introduces a shapeshifter and traditional snake goddess named Nu Wa, who moves agelessly through time from 19th century China to the Pacific Northwest in the walled, corporated-controlled nation-state of Serendipity, circa 2044, where a haunted, young girl named Miranda, conceived among durian, is tracing her mother's cabaret career. Reeking of durian, a large and stinky ('pepper-pissy') Southeast Asian fruit, Miranda shows symptons of the 'dreaming disease' and becomes involved with the salt fish smelling Evie Xin. Exiled to the outlying Unregulated Zone, her parents open a corner store where they sell durian. She told Rebecca Wigod of the Vancouver Sun, "Sometimes you just write the stuff and you're, like, 'I have no idea where this is coming from. This is what's comin' out. Let's just go with it.'"

Her collaboration with Rita Wong, sybil unrest (New Star 2013), was originally published in 2008 by LineBooks. Sonnet L'Abbe described it as "A witty, often trenchantly funny repartee on maintaining a resistant spirit in an environment of aggressive globalized consumerism"; in her review for Canadian Literature. $18 9781554200696


Jump from nineteenth-century China to 2044 Serendipity, a walled city in the Pacific North-West, with a narrator who is at times fish, snake, girl and woman. Past and future are linked by myth... and smell. "At first she couldn't place it, and it struck her as unpleasant, like the reek of cat pee tinged with the smell of hot peppers that have not been dried and are on the verge of going off... the smell of something forbidden smuggled on board in a battered suitcase, and mingled with the smell of unwashed underwear."; 0-88762-111-2


With an ear to the white noise of advertising, pop music, CNN, biotechnology, the Norton Anthology of English Literature, cereal packaging and MuchMusic, Larissa Lai explores the problem of what it means to exist on the boundaries of the human. The books consists of four long poems: "Rachel,"; a meditation in the voice of the cyborg figure Rachel from Ridley Scott's film Blade Runner and its source material, Philip K. Dick's Do Androids Dream of Electric Sheep? ; "nascent fashion,"; which addresses contemporary war and its excesses; "Ham,"; which circulates around the chimpanzee sent up into space as part of the Mercury Redstone missions by NASA and later donated to the Coulston Foundation for biomedical research; and "auto matter,"; a kind of unfolding autobiography told in poems. Larissa Lai, an Assistant Professor in Canadian Literature at the University of British Columbia, is the author of Salt Fish Girl and When Fox is A Thousand.
BC Book Prizes catalogue


Originally published by LINEBooks in 2008, sybil unrest by Larissa Lai and Rita Wong draws out the interconnections between feminism, environmentalism, and personal-political responsibility, highlighting and questioning notions of "human" and "female" evident in contemporary North American culture. It does so by referencing "Popular cultural icons, political figures, business slogans, transnational corporations, and other presences in our media-saturated world [which] populate the lines," in the words of a reviewer from Asian-Am-Lit-Fans online journal .

Yet sybil unrest is more than a glorious odyssey through contemporary culture. Reviewer Sophie Mayer, writing on her blog on Chroma, compares sybil unrest to works by Anne Carson and Mary Shelley. And Lauren Fournier, writing in the Fall 2011 issue of West Coast Line, draws attention to the way sybil unrest unlike the traditional avant-garde poetics, focused only on the cultural and aesthetic, expands outward into the cultural and political social worlds.

This book marks its space in 21st century poetics in indelible ink. The focus away from an "I" and onto an interactive and malleable subjective takes this foray into the avant-garde and makes it into "a critique of 'human' as a species", as Sonnet L'Abbe remarks in the Autumn 2011 issue of Canadian Literature. sybil unrest is clever, filled with delirious wordplay, deprecation and a subtle humour that will catch you unawares and make you laugh out loud.