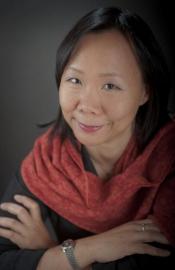 
Fiona Tinwei Lam is a Scottish-born Chinese Canadian who grew up in Vancouver. Her poetry, fiction and non-fiction have been published in literary magazines and in over sixteen anthologies (including The Best Canadian Poetry in English, 2010 published by Tightrope Books in 2011) and has been twice featured on local transit as part of B.C.'s Poetry in Transit, as well as aired on CBC Radio. She is a regular contributor to The Tyee online news magazine (thetyee.ca), providing commentary on writers, books and social issues.

Her first poetry collection Intimate Distances (Nightwood, 2003 $15.95) was one of four finalists for the City of Vancouver Book Award. She writes about her family history and the birth of her child. Twice short-listed for the Event literary non-fiction prize, she is a co-editor of and contributor to Double Lives: Writing and Motherhood, an anthology of creative non-fiction essays about juggling the passions to write and to parent, published by McGill-Queen's University Press.

Her second collection, Enter the Chrysanthemum (Caitlin, 2009 $16.96) contains poems about family, love and loss. According to publicity material, "Whether written from the vantage point of a young child observing her parents, a single parent struggling to raise a child, or a daughter watching a parent's decline and death, these poems reconnect us to what it means to be human."

She is the editor of The Bright Well, a slim volume of contemporary Canadian poems by poets across the country about first-hand experiences of facing cancer (Leaf Press, 2011, $16.95). It is dedicated to her father, Dr. Chung Nin Lam, and others she knows who have faced cancer.

Lam co-edited, with Jane Silcott, Love Me True: Writers Reflect on the Ins, Outs, Ups & Downs of Marriage (Caitlin $24.95), a collection of short stories and poems about the institution of marriage. It includes a story from Andreas Schroeder about him and life partner Sharon Brown, two people from the freewheeling 1960s who get married in 2007 after having lived together for more than 30 years and raising two children. He writes that while it is now fashionable to dump on the sixties, people forget how "anthropoidal" the fifties were. To make his point, he quotes "The Good Wife's Guide," published in Housekeeping Monthly in 1955, advising wives how to greet their husbands when they return from work: "Let him talk first - remember, his topics of conversation are more important than yours. Don't complain if he's late for dinner or even if he stays out all night. Arrange his pillow, or offer to take off his shoes. Speak in a low, soothing and pleasant voice. Don't ask him questions about his actions or question his judgment or integrity. Remember, he is the master of the house and as such will always exercise his will with fairness and truthfulness. You have no right to question him. A good wife always knows her place." After this quote, Schroeder pointedly comments, "I rest my case."


"The Chinese invented rockets 800 years ago," says Poh-Poh (grandmother) to James, who visits her on Sunday afternoons to do artwork, "for fireworks and use in battle." James spends that afternoon drawing a rocket ship. Their relationship strengthens as Poh-Poh's health and cognition deteriorates. After Poh-Poh dies, James' mother reminds him about Ching Ming Day (April 5) when people go to the graves of their ancestors with offerings of tea, food, wine or incense. Ching means pure; Ming means brightness. James and his mother visit the grave, leave flowers and oranges, bow three times. Out of his knapsack James takes a new rainbow rocket ship drawing. It is burned on a plate, as an offering. Royalties for Fiona Tinwei Lam's The Rainbow Rocket, illustrated by Kristi Bridgeman, are being donated to the Alzheimer Society. 978-0-88982-282-5
BCBW 2013