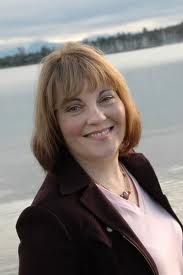 
Born in 1958, Laura Langston grew up in Vancouver and moved to Victoria. Based on a situation in her own family, Mile-High Apple Pie is about the relationship between a young girl and her grandmother who has trouble with her memory. With Danny Schur, composer and producer of Strike! The Musical, Laura Langson was a co-recipient of the 2006 Kobzar Literary Award. [See below]

Fascinated with the concept of "life after death," Langston has written a novel for reluctant readers, Exit Point (Orca 2006), from the perspective of a teenager who is killed by his own drunken driving. Guided in the after-life by Wade, and the spirit of his grandmother, the remorseful Logan realizes he was meant to save the life of his younger sister Amy, but his life took a wrong turn, literally and figuratively. Following a near-death experience from a bee sting, sixteen-year-old Hannah finds herself with the ability to heal in Hannah's Touch (Orca, 2009). In Langston's young adult novel Last Ride (Orca, 2011), sixteen-year-old Tom Shields struggles with the guilt of killing his best friend in a street race.

The Art of Getting Stared At (Penguin Razorbill 2014) deals with teenage girls and self-esteem issues. A would-be film school applicant at age sixteen, Sloane is diagnosed with alopecia areata after discovering a bald spot during a film shoot. She decides to conceal her condition only to discover, with alarm, that she is turning to the kind of person she detests: someone who is obsessed with appearances.

Laura Langston's Stepping Out (Orca 2015) traces the ambitions of an insecure, 15-year-old, disabled comedian, Paige Larsson, who attempts to graduate from the relative safety of being a YouTube comedy vlogger to competing on stage at a prestigious comedy festival in the world stand-up on stage.

+++
Laura Langston?s tenth title since 1994, Stepping Out (Orca $9.95), traces the ambitions of an insecure, 15-year-old, disabled comedian, Paige Larsson, who attempts to graduate from the relative safety of being a YouTube comedy vlogger to competing on stage at a prestigious comedy festival.  A former broadcaster now living in Victoria, Langston has been a co-recipient of the $25,000 Kobzar Literary Award presented every two years to a Canadian writer who best presents a Ukrainian Canadian theme with literary merit through poetry, play, musical, fiction, non-fiction or young people?s literature. Her winning title was Lesia?s Dream. 9781459808959


TORONTO (February 27, 2006) - The winner of the $25,000 Kobzar Literary Award will be announced March 2 at a gala ceremony in Toronto attended by The Rt. Hon. Adrienne Clarkson and The Hon. Sen. Raynell Andreychuk, both honorary patrons of the award. Masters of Ceremonies for the evening will be actors Joan Karasevich, Fred Keating, Lubomir Mykytiuk and August Schellenberg.

The $25,000 prize is sponsored by the Ukrainian Canadian Foundation of Taras Shevchenko.

This year's finalists are: Lisa Grekul, Kelowna, BC, for Kalyna's Song; Laura Langston, Victoria, BC, for Lesia's Dream; Danny Schur, of Winnipeg, MB, for Strike!-The Musical, and Larry Warwaruk, of Outlook, SK, for Andrei and the Snow Walker.


Laura Langston and Victor Bosson, both of Victoria, who first collaborated on The Magic Ear, have created another Japanese tale with The Fox's Kettle (Orca, $7.95). Akoya extends hospitality to a samurai, who in the tradition of old Japan, is really a fox. He rewards Akoya with a black kettle that, as long as she cares for it as if it were her own child, will ensure the village rice crops flourish. But Akoya is ordered to leave all her belongings and join the landowner's household. Bosson has exhibited work in Morioka, Japan, an honour rarely given a non-Japanese artist. 1-55143-132-7 -- Louise Donnelly


Former broadcaster Laura Langston also deals with loss of memory in Mile-High Apple Pie (Random House, $24.95). Margaret's grandma is "not the wrinkled kind; she's the special kind"; who wears trainers with yellow laces and once had an art gallery and played the piano.

Now Grandma confuses Chopin for Bach and sweet peas for roses. But she remembers bruises are the sweetest part of the apple. "A fruit man told me,"; she says. One terrible day, she no longer recognizes Margaret. "You are my apple-cheeked bruise girl,"; she says. And Margaret comes to understand she's like the sweet bits in Grandma's favourite mile-high apple pie. Lively collage-style illustrations by Lindsey Gardiner accompany the story based on a situation in Langston's own family. Pie recipe included.


Fascinated with the concept of "life after death,"; Laura Langston has written a novel for reluctant readers, Exit Point (Orca $9.95), from the perspective of a teenager who is killed by his own drunken driving. Guided in the after-life by Wade, and the spirit of his grandmother, the remorseful Logan realizes he was meant to save the life of his younger sister Amy, but his life took a wrong turn, literally and figuratively.


Lily needs to ace the toothpaste commercial. Last year she'd booked half a dozen gigs but this year it's been nothing but a lame non-speaking spot for salami. She's flunked the algebra test, too and if she doesn't start making some serious money, her dad's going to fire up the "less time on acting... more time on polynomials"; speech.

Lily gets acting gigs because she's "exotic."; Chinese mom, Irish-German dad. So she doesn't look like the other girls. Hair, eyes, cheekbones... Then there's the problem with the cats. Who puts cats in a toothpaste commercial? Lily is stuck in a suffocating studio cubicle with a bunch of cats, at least half of them Siamese-they're the worst-and so suddenly it's asthma attack time.

Dizzy and wheezing, Lily stumbles for the elevator, right into the burly arms of big-time director Nic Mills. The same Nic Mills who catapults unknown actors into megastars! And that's how 15-year-old Lily finds herself swept from her everyday Vancouver life to LA in Laura Langston's Hot New Thing (Orca, $9.95).

Soon Lily finds herself filling in for the injured lead in Nic Mills' latest movie, opposite dimpled, French-speaking, Emmy-winning Etienne Quinn who, as it turns out, smells as delicious as maple-sugar bacon.

Even in his loser character's dorky green sweater and Value Village jeans, Etienne radiates charm. His famous "flick of the too-blue eyes"; and a "full-on grin"; knocks the breathe right out of Lily. Getting through a scene, though, with the "French flirt"; is only one of Lily's problems.

Her aloof cousin Samantha with her "starchy blue shirt and lace-up shoes"; hasn't exactly given her a warm welcome to LA, Lily's dad and her math teacher are still on about the polynomials, and her own agent seems to be using her time supposedly chaperoning Lily to drum up new clients.

And then Lily herself gets wooed by one of the biggest Hollywood agencies. They'd love to represent her if she just tones down her unique look with breast implants, a nose job, an eye job...

It's okay to look Asian, as long as it's "non-threatening, Westernized"; Asian. Acting is all Lily has ever wanted but will she have to lose herself to do it? As she struggles with the hardest decision of her young life, Lily's strongest ally, astonishingly, is none other than Etienne Quinn.

Hot New Thing is part of the Limelights series, an on-going series of performing arts novels aimed at an 11- to-14-years-old readership. A former journalist with CBC, Laura Langston found reality too confining and went searching for truth in fiction. She now also writes adult romance and women's fiction under the name Laura Tobias,