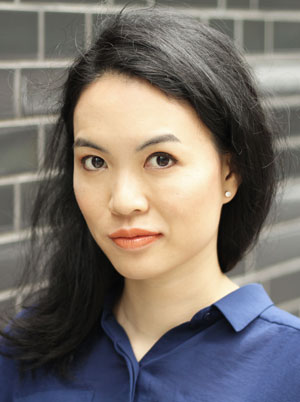 
With an MFA in Writing from Columbia University, Doretta Lau lives in both Vancouver and Hong Kong, while contributing to Artform, South China Morning Post, The Wall Street Journal Asia and Bazaar Art. Her stories have appeared in Grain, Event and subTerrain, amongst others. For B.C. BookWorld, Cherie Thiessen favourably reviewed her first fiction collection, How Does A Single Blade of Grass Thank the Sun? (Nightwood $19.95), shortlisted for the City of Vancouver Book Award, longlisted for the Frank O?Connor International Short Story Award and named by The Atlantic as one of the best books of 2014. While in residence at Historic Joy Kogawa House, she will be writing a comic novel about a dysfunctional workplace called We Are Underlings and a collection of poetry about grief. Lau will also participate in public workshops. Historic Joy Kogawa House is located at 1450 West 64th Avenue. info@kogawahouse.com

After an upbeat, intriguing, futuristic, opening story called 'God Damn, How Real Is This?', the stories in Doretta Lau's svelte, debut collection, How Does A Single Blade of Grass Thank the Sun? (Nightwood $19.95), seem to build on the one before, reducing the need for excessive illumination. She is shining a narrow floodlight in the dark.

Mostly about young, Asian Canadians coming of age in the 1990s, these stories are frequently as much about pictures or images as they are about characters. Cigarettes, alcohol, loneliness, adoption, depression and poverty; these are common leitmotifs.

The title story is the last one, shortlisted for the 2013 Journey Prize. Its title is derived from an interview with Chinese-born basketball star, Yao Ming, who, when asked about how his formative years with a team called the Shanghai Sharks had shaped his pro career, replied: "How does a single blade of grass thank the sun?";

But it's got precious little to do with basketball as Lau explores the teenage perspective of a sorry Asian Canadian gang leader who has the hots for one of his girl members as well as a penchant for beating up his small coterie of four for the purposes of 're-education.' Lau describes how these 'losers' roam through the ramshackle parts of the city.

Other stories are also full of dark corners. In 'Two-Part Invention,' the narrator decides to date dead men and decides on Glenn Gould as her perfect match. In 'Rerun', the narrator, a past TV star with breast implants, loses her adoptive mother. In 'O, Woe Is Me', a young man's tragic accident in his teens sends him into a career dodging paintballs and rotten vegetables in a "Whoop the Freak"; business.

One of the narrators in Doretta Lau's collection reminds us photography is a Greek word meaning writing in light, but in this collection Lau is mostly writing out of the shadows, investigating dark corners. I loved these selections and ended up wondering why it is that depressing stories often seem to be the most engaging? I was quickly immersed in the life of a narrator who sounds very much like the author herself, a sensitive Asian Canadian writing a screenplay for her MFA, living in Vancouver and impressively knowledgeable in music and photography.