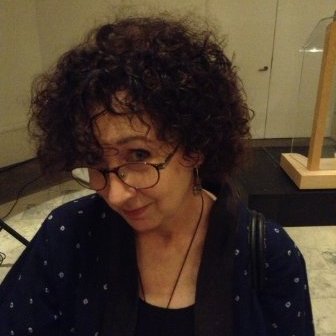 
The owl on Coast Salish artist Susan Point's sculpture Cedar Connection at the Vancouver Airport looks like it's about to fly through the adjacent plate glass window.

Bill Reid's stunning bronze sculpture The Spirit of Haida Gwaii, with its boatload of paddling creatures and a mysterious spirit, sits surrounded by steel, glass and marble.

Long-time Georgia Straight visual arts critic and curator Robin Laurence earlier provided the text to accompany photos by Ulli Steltzer for The Spirit of Haida Gwaii: Bill Reid's Masterpiece (Douglas & McIntyre, 1997; 2006), a tribute to the 20-foot bronze canoe filled with creatures from Haida mythology. One copy exists in the Canadian Chancery in Washington, D.C.; the other is in the main foyer of the Vancouver International Airport.

Robin Laurence studied at the Universities of Calgary and Victoria, and the Banff School of Fine Arts.

In 2016, Robin Laurence won this year's Royal Canadian Academy of Arts medal, given to individuals who have made a significant contributuion to the cultural life in Canada. Joseph-Richard Veilleux, RCA President wrote to Laurence that, "You have been one of Vancouver's most active and integral arts writers and cultural contributors for over twenty years. Your achievements as an award-winning visual arts critic for The Georgia Straight and as a contributing editor of both Canadian Art and Border Crossings magazines, have provided an insightful and intelligent context for the arts in the BC region, and Canada as a whole. Your ongoing dedication to the visual arts in Canada through numerous publications, reviews, essays, and curatorial work, has informed and supported the cultural community of arts in this nation."

She lives in Vancouver.

***
Gathie falk was something of a late bloomer. Her Russian immigrant father died just ten months after she was born on January 31, 1928 in Alexander, Manitoba. She grew up during the 1930s and 1940s in a Mennonite community watching her mother make cabbage rolls by hand, hearing her brothers skate on a backyard rink while she lay sick in bed, and taking music lessons courtesy of an anonymous donor. Forced to leave school early, she finished high school by correspondence in 1947, then moved to Vancouver.

After some menial jobs, she became a school teacher during which time she re-awakened her childhood passion for art. This led her to take classes in the 1960s with J.A.S. MacDonald, Roy Oxlade and Glenn Lewis. Her first important solo exhibit was in 1968. A major book about her work was published in conjunction with her second major retrospective exhibit at Vancouver Art Gallery in 2000.

Co-written by Robin Laurence, Gathie Falk's new memoir, Apples, etc. (Figure 1 $22.95) reflects on her nearly ninety years of life and almost fifty years as a dedicated artist, alternating chapters of autobiography and artmaking. Along the way she has received the Governor General's Award in Visual and Media Arts, the Audain Prize for Lifetime Achievement in the Visual Arts, the Gershon Iskowitz Prize, the Order of British Columbia and the Order of Canada.

The gamut of her work is hard to define. She has created performance works involving eggs and bird feathers; paintings of flower beds and night skies; and ceramic sculptures of fruit, men's shoes and dresses. Her oeuvre is often and aptly summarized as a "veneration of the ordinary." 978-1-77327-012-8

Reviews of the author's work by BC Studies:
A Sense of Place: Art at Vancouver International Airport