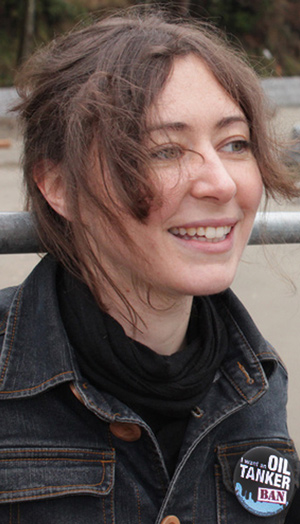 According to publicity materials:

"The Enpipe Line goes dream vs. dream with Enbridge's proposed Northern Gateway Pipelines. If built, these 1,170 kilometre pipelines will carry tars sands oil and its poisonous by-products across more than 700 streams and rivers between Alberta and the BC port of Kitimat. In Kitimat, crude oil would be pumped into supertankers for export, threatening the fragile coastal ecosystem with a major spill. Originally conceived as a 1,170 kilometre-long collaborative line of poetry to match the length of the proposed pipelines, The Enpipe Line has grown to over 70,000 kilometres. Its community of poets comes from all ages and walks of life: woodworkers, painters, environmental campaigners, single parents, professors, children. This book, like the pipeline it opposes, outlines a dream. But, unlike Enbridge's proposal, The Enpipe Line represents the shared desire of living community: that the Northern Gateway Pipelines proposal never see the light of day."

Articles: 1 Article for this author
The Enpipe Line
Press Release (2012)

"On-line for over a year, [The Enpipe Line] resonates as a manifesto on devotion to our world and inscribing that attention into the earth and water works of our imagination and our desire for a sustaining world.";
-Fred Wah, Parliamentary Poet Laureate

March 23, 2012 (Vancouver) - Poets will gather at the Enbridge Inc. Northern Gateway Pipelines office at 505 Burrard Street on Friday, March 23, 2012 at 7:00 p.m. to launch The Enpipe Line, a book written in resistance to the company's tar sands pipeline. To enpipe-a project coinage-is to block up and/or fill a pipe to bursting. The Enpipe Line is designed to go dream versus dream with Enbridge's proposed pipeline. As such, proceeds from the sale of the book go into a Northern Gateway Pipelines resistance legal defense fund administered by the editorial collective.

The editorial collective is made up of some of Vancouver's most interesting younger writers. They are: Jen Currin, Jordan Hall, Ray Hsu, Christine Leclerc, Nikki Reimer, Melissa Sawatsky and Daniel Zomparelli. The collective has worked with close to one hundred poets from around the world to create The Enpipe Line, which is being launched amidst the controversial Enbridge pipelines Joint Review Panel process. The book, which has been endorsed by Parliamentary Poet Laureate Fred Wah, is also being launched just in time for April's Poetry Month.

"We came together as a community to write something that speaks to the heart of the resistance to Enbridge's tar sands pipeline,"; said Christine Leclerc. "The possible world we hear on quiet days has a breath as close as imagination.";

"What I hold in my hands is more than 70,000 km of creative resistance. Ezra Pound once said that, 'Literature is news that stays news.' This book taps into an energy that outlasts any news cycle, an energy deeper than any oil well,"; says Poet and Editorial Collective Member Ray Hsu of The Enpipe Line.

Award-winning graphic designer Carleton Wilson worked with Creekstone Press to design a book that would reflect The Enpipe Line's non-standard collection of poems. Its landscape format speaks how the poems are connected to the land. The 70,000+ kilometers of poetry contained in this book appear in two columns, like two anti-pipelines designed to go dream versus dream with Enbridge's pipeline proposal.

Copies were sent to Enbridge Northern Gateway Pipelines CEO John Carruthers, Natural Resources Minister Joe Oliver, Enbridge CEO Patrick Daniel and Enbridge Contractor Patrick Daniel, all of whom are quoted in the book, prior to the launch.

For launches in other cities, please see:
https://www.facebook.com/pages/The-Enpipe-Line-70000-kilometers-of-collaborative-resistance-poetry/107609049310002
Creekstone Press