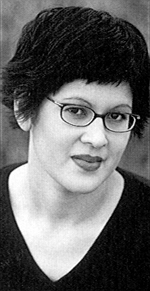 
Nancy Lee's Dead Girls (M&S, 2002) is a collection of eight stories, received the 2003 VanCity Book Prize for best B.C. book pertaining to women's issues and was named Book of the Year by NOW magazine. It was also a finalist for the Ethel Wilson Fiction Prize and the Danuta Gleed Literary Award. Lee was subsequently selected by Margaret Atwood as one of seven writers to watch for a CBC Radio special and she was asked serve as a jury member for Canada Reads 2003. Her eight stories "of desire and delusion" in Dead Girls are linked by a serial killer's arrest in Vancouver. We meet a hand-model who's bond with her ailing father is revealed through an inventory of her body parts; three teenagers who tangle in an awkward scheme of sex and money on Valentine's Day; and a pill-dependent nurse who juggles neuroses, infatuation and exhaustion while supervising a high school dance-a-thon.

Also concerned with adolescent recklessness and desire, Lee's highly-charged follow-up novel The Age (M&S 2014) is about a troubled teenaged girl, Gerry, who takes refuge in a gang of misfits in response to an absent father and a mother who is distracted by a new relationship. As Gerry becomes embroiled in the gang's plans to subvert a peace march, she becomes enthralled with the group's leader who is plotting the violent disruption of the rally. Gerry is divided by her fantasizing and reality; her need to be loved leads her towards danger and tragedy. The Age is "set amidst nuclear tension in 1984 Vancouver."

In 2007, according to her promotional materials from her agent: "Born in Cardiff, Wales, to parents of Chinese and Indian descent, she spent the early years of her life in Peterborough, England, before emigrating to Canada with her mother. Eager to make her way in the world, Nancy got her first job, cleaning bathrooms in a donut shop, at age thirteen, and went on to a seemingly endless stream of ridiculous vocations -- factory worker, children's party hostess, hair apprentice, t-ball coach, karaoke DJ -- before launching a performing arts publicity firm, in 1994. Lee has a B.A. in Theatre and Film from the University of British Columbia and an MFA from the UBC Creative Writing Program. She currently teaches fiction writing at the Simon Fraser University Writing and Publishing Program."

Nancy lives in Vancouver and teaches at Simon Fraser University's Writing and Publishing program and has taught at UBC's Booming Ground. She has also been a Canadian Writer-In-Residence at the University of East Anglia in Great Britain.