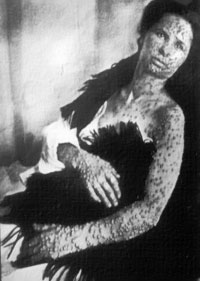 
Kamloops-based artist Eileen Leier compiled a series of photographs to document the history of "Canada's Ellis Island," the island compound at Grosse-île, Quebec, in the St. Lawrence River, where immigrants coming to Canada from Europe were detained for medical assessment betweem 1832 and the 1920s. In 1909 her grandparents had landed on the island as German farmers fleeing religious persecution in their adopted Russia, on their way to the Canadian Prairies. Her desire to re-connect with her own family history led to an exhibition of her photographs that opened at Presentation House Gallery om North Vancouver on November 13, 2003. With texts by Anna Carlevaris, John Bryden, curator Bill Jeffries and Leier, her work was published as as a catalogue entitled Eileen Leier: Grosse-île: The Immigrant Quarantine Station (Presentation House, 2004).