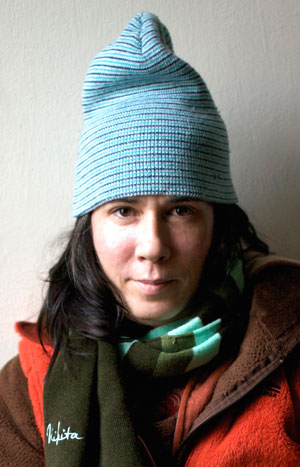 
Rodger Touchie is unapologetic about it. Edward S. Curtis was a great artist. By presenting the range of the Seattle-based photographer's work in Edward S. Curtis Above the Medicine Line (Heritage $19.95), especially as it relates to Western Canada, Touchie is celebrating one of the most significant photographers of North America.

Photographer Rita Leistner and Métis/Dene playwright Marie Clements' The Edward Curtis Project: A Modern Picture Story (Talonbooks $24.95) also portrays Curtis sympathetically but they contend Curtis should be held accountable for opportunistically describing First Nations people at the outset of the twentieth century as a vanishing race.

"The irony of Curtis' work is that he, his patrons and those Americans and Europeans who bought his photographs were demonstrating a longing for something they themselves had destroyed,"; writes Leistner, a non-aboriginal photographer.

Staged at Presentation House in North Vancouver for the 2010 Cultural Olympiad, Marie Clements' play, The Edward Curtis Project: A Modern Picture Story, examines the hubris of Curtis, augmented by an exhibit of Leistner's portraits of 'real Indians' in modern life, but his love of First Nations people also comes through.

Clements shows the devastation felt by Curtis due to events around him and depicts the personal cost of his quest to fulfill his artistic vision.
Replete with more than 150 photos, Rodger D. Touchie's Edward S.
Curtis Above the Medicine Line admires the gumption of a man who spent thirty years visiting 80 "tribes"; and taking more than 40,000 photographs.

It would be simplistic to suggest that the two books on Curtis, or their respective authors, are at loggerheads. Rather they are coming into collaboration with Curtis from two different directions. Cumulatively there is synergy in the grappling for deeper truths.

It is unquestionably remarkable that Edward Sherrif Curtis produced 20 volumes of The North American Indian, Being a Series of Volumes Picturing and Describing the Indians of the United States and Alaska (1907-1930) in keeping with his gargantuan goal of recording, with both film and text, all possible information on Aboriginals west of the Mississippi.

The largest volume (# 10) was solely devoted to the Kwakiutl / Kwakwaka'wakw with whom he made the movie Land of the Head Hunters (1914) for release in cinemas across North America.
As well, Curtis developed a particular fascination for the Kutenai / Ktunaxa and volumes #9 (Salishan / Interior Salish) and #11 (Haida and Nootka / Nuu-chah-nulth) were also based on B.C. travels.

When the first two volumes of his series were published in 1907, the New York Herald hailed Curtis' work as "the most gigantic undertaking in the making of books since the King James edition of the Bible."; But later critics such as Ralph Maud have concluded, "One cannot help but think that his archival camera was somehow supposed to exonerate the genocide.";

Seeing their dwindling numbers-and counting them, when he could-Curtis believed Aboriginals of western North America were doomed to disappear. This provided Curtis with his mandate to generate a massive archive of images that were frequently staged for effect.
But Curtis can be easily criticized for what he didn't do. As Leister notes, "Unlike his contemporaries Lewis Hine and Jacob Riis, who pioneered concerned photography, Curtis did not use photography for social reform or to document an accurate and un-altered version of the social injustices he witnessed-such as the growing misery within First Nation communities caused by abusive government policies like the Christian Church-run Residential School System, and the outlawing of regalia and other traditions.";

Although the ethnographic value of Curtis' images is enormous and valued by First Nations, he has been accused of doctoring reality by continually posing and dressing his subjects artificially.

In defense of Curtis, Touchie concludes his compact and lucid overview description of Curtis' work by the photographer's lifelong mentor and friend, George Bird Grinnell:
"The results which Curtis gets with his camera stir one as one is stirred by a great painting, and when we are thus moved by a picture, and share the thought and feeling that the artist has when he made the picture, we may recognize it as a work of art.";

Born in Wisconsin in 1868, Edward Curtis first arrived in the pioneer villages of Puget Sound at age 19. One of his first subjects was 'Princess Angeline,' the daughter of Chief Seattle, in 1895.

Four years later Curtis was a photographer for some of the world's leading scientists on a two-month scientific voyage from Seattle to the Bering Sea. This journey up and down the B.C. and Alaska coastline was the catalyst for his obsession with portraying the Aboriginal spirit and, ostensibly, eradicating false notions of Aboriginal life while responding to the tragic demise-in his eyes-of cultures and peoples.

Curtis' contributions to Scribner's magazine and his early exhibitions at
New York's Waldorf-Astoria earned him the support of President Theodore Roosevelt, who, in turn, enabled him to meet America's richest man, the financier John Pierpoint Morgan, in 1906.

Prior to publication of Curtis' first volume, J.P. Morgan confirmed he would buy 25 sets of 20 leather-bound books for $75,000, to be paid in five installments. He would also own 300 original prints.

When the first five volumes appeared to critical acclaim, J.P. Morgan was so impressed he agreed to provide $60,000 in additional funding. Despite these connections, Curtis' Seattle studio was chronically short of money as he struggled to complete his journeys to all tribes west of the Mississippi from New Mexico to Alaska. His marriage faltered and would eventually come asunder.

For 20 years Curtis was greatly assisted by the mostly unheralded W.E. Meyers, a former reporter for the Seattle Star newspaper, who took notes by shorthand and assembled the narratives of ethnographic materials.
Curtis' work was also greatly assisted in B.C. by George Hunt, son of a Tsimshian woman and a Hudson's Bay Company employee.

The interpreter George Hunt lived for 60 years among the Kwakiutl and also greatly contributed to the work of the German-born anthropologist Franz Boas.
During his three seasons with the Kwakiutl, with the crucial assistance of Hunt, Curtis made one of the first made-in-B.C. feature films, In the Land of the Head Hunters, presented for the first time in 1914. Filmed mostly on or near Deer Island, it premiered on December 7, 1914 at the Moore Theatre in Seattle and was shown in Seattle and New York during the next two years.
The 35 mm prints disappeared until a copy was recovered by George Quimby, Chair of the Anthropology Department at Chicago's Field Museum, in 1947. Quimby and Bill Holm of Seattle transferred the footage to 16 mm stock about twenty years later.

Interviewed at age 90 in 1988, Margaret Frank was known as Princess Ommagalees when she had a starring role in that Curtis movie at age 17. Born into the Kwawkgewith First Nation and raised near present-day Port Hardy, Margaret Frank, granddaughter of George Hunt, played the role of a princess named Naida in Curtis' rendition of a story recorded by a man she knew as "the Professor,"; Franz Boas.

Margaret Frank recalled how her uncle stood in a war canoe, hidden behind a huge wooden thunderbird mask, flapping his arms up and down inside man-made wings, as if he was attempting to fly. Curtis stood in hip-waders at the tideline, cranking his camera on a tripod.

"My mother stood up in the stern and began to dance and sing,"; she said. "Then, suddenly, the canoe hit a rock and my mother toppled over onto several others, and everyone burst out laughing. Except Mr. Curtis. He scowled and took the film out of his camera and threw it away in disgust. 'This is a serious film,' he said. He didn't want his Indians to laugh.";

[In the movie Naida is pursued by a shaman and a chief's son named Motana. They fight and the chief's son kills the shaman. When Motana and Naida marry, the shaman's brother raids Motana's village and abducts Naida. She is happily reunited with Motana at the end of the story.] A revised and expanded version of the restored film footage was shown in various North American locations in 2008.

In 1919, Curtis' wife Clara finalized divorce proceedings and received his studio and all of his negatives as part of the settlement. In 1920, Edward Curtis moved from Seattle to Los Angeles with his daughter Beth, assisting Cecil B. Demille in the making of The Ten Commandments.
Curtis died of a heart attack in 1952 at age 84. An original edition of The North American Indian sells for more than $80,000. There are many books and at least one movie about the life and work of Curtis, The Shadow-Catcher.
Touchie's favourable comments about Curtis as a student of ethnology are sprinkled throughout his text.
"Curtis was an avid researcher who read all of the journals of early fur traders and relied heavily on oral history of tribal elders to establish tribal roots.";

"Curtis was always candid in his observations and never afraid to deliver his personal assessment of the physical, mental or emotional characteristics of the many different people he studied.";

"In all his books, the stunning quality of Curtis' photographs tended to upstage his prose and the extent of his research. However, Curtis stood out among field researchers with his ability to interact with those he described as 'the traditionists' of many tribes. This enabled him to document the oral history of many tribes.";

In response to those journeys with Clements, as well as to Curtis's legacy, Leistner's parallel photojournalistic investigation portrays people as they really are; not how any photographer or society-at-large might prefer them to be.
For Clements, the process of collaborating with both Leistner and Curtis, as strange bedfellows for her play and book, was about the process of inviting discourse rather than generating schisms between light and dark, Aboriginal and white, vanishing or surviving.

"I needed to see from all angles,"; she writes, "because I wanted to know what was behind the picture, and to do that I needed to go in with artists who had the guts and humanity to see it through.

"I will be forever affected by what I saw on our 'Edward Curtis field trips' because it was also what I knew to be true-there is no Vanishing Indian, never was, but for a convenient thought.