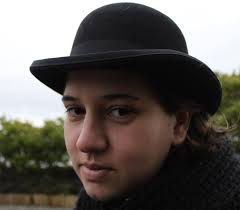 
In 2015, Alex Leslie, author of The things I heard about you (Nightwood Editions, $18.95), was awarded the $4,000 Dayne Ogilvie Prize presented to an emerging Canadian writer from the LGBT community who demonstrates great promise through a body of work of exceptional quality. It was described by CBC Books as "a love song to the coast of British Columbia and its people."; The unpublished manuscript was shortlisted for the 2014 Robert Kroetsch award for innovative poetry.

Alex Leslie previously published a collection of stories, People Who Disappear (Freehand, 2012), shortlisted for a 2013 Lambda Award and a 2013 Relit Award, and a chapbook of microfictions, 20 Objects for the New World (Freehand, 2011). Alex's writing also won a Gold National Magazine Award for personal journalism and a CBC Literary Award for fiction.

Alex Leslie has taught fiction in Langara University's Continuing Studies program and has run writing workshops for the street newspaper, Megaphone, in the Downtown Eastside.