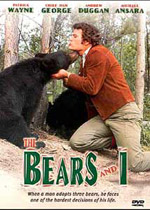 
Leslie was the author of The Bears and I: Raising Three Cubs in the North Woods (Toronto, Vancouver: Clarke, Irwin, 1968; Macmillan, 1968), illustrated by Theodore H. Xaras. The true story arose from Leslie's experiences near Babine Lake panning for gold to pay for his university education. He spent three years at Babine Lake as the 'adopted father' of three orphaned bear cubs. He ostensibly teaches the young cubs how to hunt, fish and gather berries, etc., and they have a mutually trusting relationship. It was the basis for a 1974 movie starring Patrick Wayne, Chief Dan George, Michael Ansara and Valentin de Vargas. John Denver contributed the song 'Sweet Surrender' for the movie, filmed in British Columbia. Leslie once wrote, "It is not important that a hawk takes a robin, that a bear robs a grouse nest. That is nature's own salient way even if we don't understand it...Wilderness life has gone on that way since the beginning, and the prey has withstood the predation. But when man steps in....the very soul of nature cringes for having endowed one of her creatures with intelligence disproportionate to responsibility."