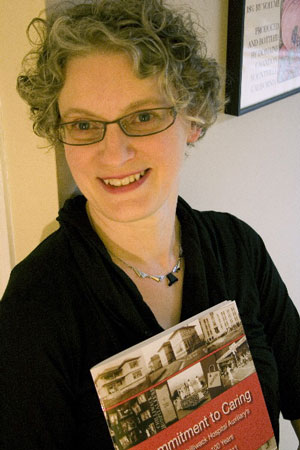 
In 2010, Andrea Lister became the new editor of British Columbia History for the BC Historical Federation. She has a B.A. in History from the University of B.C. (1994) and a Certificate in Technical Communications (2003) from Simon Fraser University. She worked for many years as the Communications Manager for a national software and services firm. She is also a web designer for the Maple Ridge Museum and Community Archive's website, a genealogist and a writer.

She designed David B. Reid's Fields of Seams and Dreams: A History of Plowing in the Valley (2010) and is the grand-niece of the author, who is renowned as champion plowman. She also compiled a history of the Chilliwack Hospital Auxiliary. [See below]

Articles: 2 Articles for this author

(Chilliwack, BC, March 15, 2011) Commitment to Caring is the story of determined women, in a time before they were considered persons under the law, who fundraised, sewed, canned, and knitted to establish Chilliwack's first hospital. The Chilliwack Hospital Auxiliary announced today the publication of a new book COMMITMENT TO CARING: CHILLIWACK HOSPITAL AUXILIARY'S 100 YEARS, 1911-2011, ($20.00) by Andrea Lister.

In a time before medicare these women formed the Chilliwack Hospital Auxiliary in 1911 and recruited their sisters-in-laws, daughters, and friends to join them in their efforts and take over for them as they aged. They enlisted the support of the community in supporting the hospital for 100 years through wars, depressions, and social changes. They have left, and continue to leave a lasting legacy, with their hard work and dedicated volunteerism. Richly illustrated with seldom-seen photographs Commitment to Caring is a celebration of these women. All proceeds from the sale of this book go towards the purchase of equipment for the Chilliwack General Hospital.

She is also a direct descendant of Mrs. Julia Grossman one of the founding members of the Chilliwack Hospital Auxiliary.

Early settlers in the Fraser Valley from Europe, England, Ireland, Scotland, and Ontario tilled the soil with horse teams and walking plows to prepare the land to plant their crops. As with many aspects of agriculture, from who had the best cows to who made the best jam, plowing also became a competition. Chilliwack became the first district in British Columbia to initiate the custom of having annual plowing matches.

On an early Wednesday in November 1931 19 year old Charlie Reid and his 22 year old brother George made their debut in the novice class at the 8th annual Chilliwack Plowing Match and second annual Provincial Plowing Match. According to the November 5th, Chilliwack Progress the match was one to remember. "Altogether it was a picture one takes pleasure in recalling - the richness of a late autumn day with its clearness and freshness of air; its brilliancy of color in the sky and on the hills around; sturdy plowmen turning up the warm, fresh sod with a perfection and deftness which only those who love their work with an artist's soul could do.";

Each plowman had from 10:00 am to 12:00 noon to plow six rounds or twelve furrows laid back on 1/3rd of an acre, or they forfeited 5 points off their total. When finished, the plowed land should be free of weeds, grass etc., well packed, straight as possible, uniform furrows, good ins and outs, and neat as possible. Charlie came first with 83 points winning the Horatio Webb cup and a choice of $151 or a walking plow donated by the Cockshutt Plow Company. Charlie chose the plow. He also won for best crown and best finish and took home the Vancouver Challenge Trophy for the most points in classes, 2, 3, 4 and 5. George Reid came second with 78 points and also won for the best decorated team.

Charlie used the Cockshutt Punch horse walking plow on his farm until 1945 when he sold his farm and went into logging. The plow was purchased by Bill Dyble of Sardis. It was used for many years to compete in plowing matches by Bill and his brother Wilf, as well as, Norman Morrow of Agassiz.

David Reid, younger brother of the Charlie, recounts in his book Fields of Seams and Dreams: Plowing in the Valley that he bought the plow about 1982 and using his blacksmith experience rebuilt it to new condition. The Cockshutt Punch was David's preferred sod plow and with his team of two Belgian-Percheron cross grades, Mindy and Queen, it enabled him to win 37 out of 38 plowing matches from 1987 to 2003. In 2003 David used the plow in competition for the last time and donated the plow to the Atchelitz Threshermen's Association to be put on display.

Chilliwack is one of a handful of communities that still run plowing competitions. The 90th Annual Chilliwack Plowing Match was held on Saturday, April 14, 2012. ●