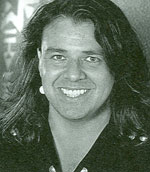 
Internationally renowned Plains Cree Nation arist George Littlechild was living in Vancouver when he provided the illustrations for Richard Van Camp's A Man Called Raven (San Fracisco: Children's Book Press, 1997). He previously collaborated as a co-author of This Land is My Land (San Fracisco: Children's Book Press, 1993).
The Spirit Giggles Within (Heritage, 2012), foreword by Ryan Rice, is a collection of Littlechild's work spanning nearly four decades.

Articles: 1 Article for this author
George Littlechild: The Spirit Giggles Within (Heritage $59.95)
Article (2012)


Spanning nearly four decades of work, George Littlechild: The Spirit Giggles Within (Heritage $59.95) contains more than 150 of the biracial, Plains Cree artist's mixed-media works, with commentary by the artist.

In his foreword, Mohawk artist Ryan Rice, chief curator at the Museum of Contemporary Native Arts in Santa Fe, describes Littlechild as "an amazing colourist-a magician who has the ability to create a rainbow. His colours defy darkness; when you close your eyes, you can imagine his kaleidoscopic palette lighting your path.";

Throughout his emergence as one of Canada's foremost First Nation artists, George Littlechild has been inspired by ancestral images. "I try to imagine their experiences, their lives, who they were and what they did,"; he says.

Adopted as a child, George Littlechild has scoured archives like a genealogical detective, incorporating his findings into his work. Raised by foster parents in Edmonton, George Littlechild now lives in Courtenay, B.C.
Here he recalls his origins as an artist.


My foster mother, Winnie, said that when I arrived at her home at the age of four, I was already drawing. She was instrumental in seizing and nurturing my young talent. By the time I was in Grade 3 or 4, Winnie had sought out an art teacher for me. Every Wednesday after school, I would sit in a room in the basement of an old Victorian home in Edmonton's Highlands neighbourhood. For 50 cents a lesson, my teacher, Miss Ethel Field, taught elderly women and children the basics of painting.

Miss Field had been a professor at the University of Alberta, but when modern art started to dominate the scene, she retired. Her forte was painting portraits of First Nations and Inuit people. She was my first role model and mentor.

My second great art adventure was obtaining a Bachelor of Fine Arts from the Nova Scotia College of Art & Design. I had to prove to others as a First Nations man that I had the intelligence and drive to pursue and complete a degree program. It was a goal of mine-I did what, at one time, I thought was impossible. In fact, for many years I tried to resist my calling as an artist but the voice was too strong. Post-secondary education added the right information and skills to help create the artist I would become.

It was a good foundation that informed me about art and art history. It was an important period of my life and has remained with me since.

As a youth, I did not realize that I was biracial, half Plains Cree and half white. I had not been told that my late father, James E. Price (1913-1966), was white or that my late mother, Rachel Littlechild (1929-1965), was of the Plains Cree First Nation. All I knew was that I was Indian. I was raised in foster care, a victim of the Sixties Scoop, and I was labelled "Indian"; by those around me. As a child, I fought racism and had a true understanding of "the other,"; not equaling or belonging. I embraced my situation and found a way to speak out against racism and ignorance through my art. My foster parents were Dutch-Canadian, and I am lucky to have been placed in such a loving home where I was accepted without reservation and encouraged to explore my First Nations heritage. It was only when I turned 17 that I learned of my white blood. It was then that I started an 11-year sojourn to learn about my personal family history and to connect with my birth family, thus creating a new identity. I am a blend of many things.

In my search to reconnect with my biological family, I found myself at many archives-researching people and dates, towns and censuses-and I placed ads in newspapers with requests, hoping to reconnect with family members. I became an avid detective in the process. Amazingly, some interesting and supernatural situations occurred while I was seeking my family.

Without these events, I may have never even found or met certain family members, including my sister Marilyn. My motto was to never give up. I didn't, and now I have a huge extended family.

Elements of this unfairness have created fodder and resources for my inspiration, fuelling me to create images that tell that story of repression. It is a story of survival, loss and reconstruction after enduring disease, reserve systems, residential schools and the Sixties Scoop. First Nations peoples have persevered, despite being dominated by the federal government's Department of Indian and Northern Affairs (now called Aboriginal Affairs and Northern Development).

In First Nations cultures, there is no word for art because art was in every aspect of life. In spiritual practice, adornment and how a person conducted themself, art was life itself. Art plays an important role in culture, and it is essential that artists create a diorama for dialogue about issues that affect humanity. The artist or visionary has an acute awareness and understanding that allows him or her to stand up and raise awareness or make social change about things and events that the public does not or cannot address. The artist's stance is strong and full of insight, creativity and commitment. Being an artist means being political. The artist becomes the medium to translate issues and a conduit to create change and provoke thought.

Over the years, I have been called on to conduct art workshops and residencies in schools and at conferences and art-related events. These opportunities have given me great joy as I witness art being created in youth and adults who may never have had such an experience. To see the happiness that art creates within these gatherings, and the people who are part of these workshops, is beautiful. As a full-time artist and part-time educator, my art practice has provided me with ample projects over the years. I am always amazed at the varied art-related situations of which I have been a part and continue to participate in.

In my work, I am committed to righting the wrongs that First Nations peoples have endured by creating art that focuses on cultural, social and political injustices. As an artist, an educator and a cultural worker, my goal is a better world. It is my job to show the pride, strength and beauty of First Nations people and cultures, and contribute to the betterment of mankind. Art is my best friend. It has never let me down through tough and good times. We have remained united. I thank the Creator daily for this gift, the gift of art. 978-1-927051-51-1