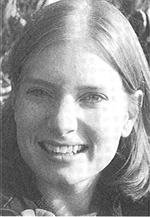 Born in 1973 and raised in Creston in eastern British Columba, Tanya Lloyd of Vancouver, as of age 21, became one of the province's least-known but bestselling authors during the 1980s and 1990s after she began making travel and photography books for Whitecap Books "raving about the beauty of places that she had never actually visited." As a photo researcher and photo editor she has compiled a Canada Series, an America Series and Canada: A Visual Journey.

Her first book that is not dominated by photographs is an inspirational anthology entitled Canadian Girls Who Rocked the World (Whitecap, 2001), illustrated by Joanna Clark. It profiles more than 25 unusual, creative and courageous women born in Canada. Her promotional material notes she is an avid Ultimate player and she is married to "the world's only Burmese occupational therapist."; In the 21st century she began using her married name, Tanya Lloyd Kyi, first releasing Police Line: Do Not Cross. Her second young adult novel, My Time As Caz Hazard, concerns guilt after a high school classmate's suicide. [See Tanya Lloyd Kyi entry]