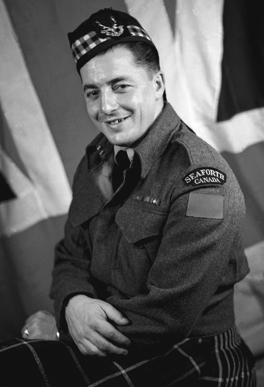 
Thomas Glen Lockhart self-published a novelized tribute to the heroics of one of Canada's most remarkable soldiers, Private Ernest "Smokey"; Smith, revered for his bravery during World War II when Canadian troops were fighting in Italy, near the town of Cesena.

In late October of 1944, Smith was part of a platoon sent on a tank hunting mission to help establish a bridgehead over the Savio River under cover of darkness. The novel Last Man Standing: The Life of Smokey Smith, VC, 1914-2005 (Friesens 2014) recounts how Smith single-handedly destroyed multiple German Panzer tanks with projectile infantry anti-tank guns and protected a wounded comrade with a sub-machine gun from opposition forces. "In less than one hour," states promo material, "one man changed Canadian history forever."

Ernest Smith was born in New Westminster and later rode the rails during the Depression. He was nicknamed Smokey due to his blazing speed on the high school track team. He volunteered to serve with the Canadian Seaforth Highlanders Regiment in 1940. He once reputedly said, "I don't take prisoners, period. I'm not paid to take prisoners. I'm paid to kill them. That's all there is to it."

Smith's anti-tank platoon (about 20-30 men) destroyed three Panther Tanks, two self-propelled artillery pieces, a half-track, a scout car, and killed many Germans. Something of a rebel, he was promoted to Colonel nine times but was continually busted back to the rank of Private.

Smith was such a notorious hellraiser that when news arrived that he would receive the Victoria Cross, military police were instructed to place him in jail in Naples to ensure he would remain sober and accounted for. He was the only Canadian Private to win the Victoria Cross during World War II. It was presented to him in person by the King. Celebrated in his hometown of New Westminster, Smith married photographer Esther Weston in 1947 and re-enlisted during the Korean War. By the time he died at age 91 on August 3, 2005, Smith was Canada's last surviving recipient of the Victoria Cross.

The novel is endorsed by Hon. John A. Fraser Hon. Colonel Ret. Seaforth Highlanders of Canada.