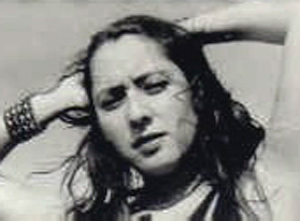 
Karla Lottini is the pen name for Mexican journalist and whistleblower Karla Berenice García Ramírez who has sought asylum in Canada. Lottini fled to Canada as an asylum seeker in 2008. While in Canada, Karla Lottini launched her non-fiction book, The Talent of Charlatans, an exposé of the severe corruption within the cultural agencies of the Mexican Government.

According to UBC's Manuela Valle, "Karla Lottini is an amazingly brave woman, journalist, and mother who is facing deportation back to Mexico. She has been denied political asylum despite the death threats she has received after the publication of her book. The support from Canadians to her case is absolutely critical to protect her and her family from an increasingly violent and deadly climate of censorship in Mexico."

In Mexico, Lottini worked for a government ministry, the National Council for Culture and Arts (Conaculta), and won awards including Cultural Journalist of the State (Quintana Roo, 2000). While employed at Conaculta, she uncovered severe corruption within the government ministry. As a result, Lottini and her family members were allegedly subjected to verbal and physical intimidation including repeated death threats.

By 2012, she and her husband had two Canadian-born children, including a one-year-old as well as a newborn baby. As is the case for 90% of Mexican asylum seekers in Canada, Karla has been refused refugee status but has an active application to remain in Canada on humanitarian and
compassionate grounds and is also seeking a judicial review of her Pre-Removal Risk Assessment.

A press conference about her predicament was held with her lawyer Lobat Sadrehashemi on January 19, 2012, at 10 am, at Vancouver's YWCA (733 Beatty Street).

Articles: 1 Article for this author
The Talent of Charlatans
Press Release (2012)

Karla Lottini is a Mexican Journalist currently residing in Canada on an unresolved refugee claim. That claim is based on death threats she received while preparing The Talent of Charlatans, an exposé of corruption within the cultural agencies of the Mexican Government, for publication. As a result of those threats, Karla left the country, and decided have the book published in English as well as Spanish.

Our event will combine a discussion of the claims Lottini makes in her book with a larger discussion of the perils of journalism in contemporary Mexico. This country has for some time been one of the most dangerous places in the world to work as a journalist, as for more than two decades journalists have been targeted for murder when reporting on various criminal activities. At this point there is no effective journalism taking place in large regions of the country, resulting in a situation in which our understandings of various critical phenomena - such as the drug trade and the government's response - are largely based on official reports, rumour and speculation.

What is most disturbing about this issue is that, if Lottini's claims are borne out, the threats to journalists in Mexico are spreading beyond the drug war and into a much larger arena. This portends a potentially chilling effect for all reporting in Mexico.

Karla Lottini (born Mexico City, 1973), graduated from the School of Writers (SOGEM); Cultural journalist; ex-reporter of the National Council for Culture and Arts (Conaculta), and Cultural Promoter who has given literature workshops. She has published in various newspapers and magazines, and won awards such as: Cultural Journalist of the State (Quintana Roo, 2000); and Mythological Story (Sian Ka'an, Qroo, 2001). In 2005 and 2006, she coordinated the community projects which resulted in two published books: De ficciones y divagaciones and Pasiones. Currently she lives in Vancouver, where she works as a volunteer in ecological and cultural activities. She also participates in the project www.72migrantes.com and as a migrant writer in the Vancouver Public Library's "Spanish Voices"; program. She is a member of the Vancouver South Cultural Project, and recently collaborated with the radio program "Latino Soy."; She tries to exert her "literary activism"; in favour of Human Rights, and, like millions of Mexicans, is fed up with corruption, impunity and death because of violence in Mexico.