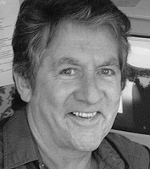 
Born in London, England, on December, 19, 1951, journalist, documentary writer/director and music video director Al MacLachlan of Nanaimo has lived in North Vancouver, the Sunshine Coast, Montreal, Toronto, New York, Vancouver, the Okanagan and Mexico. He has written freelance articles for The Globe and Mail, The Vancouver Sun, The Georgia Straight and other publications.

Set in contemporary Vancouver, his first novel After the Funeral is about an amnesiac who attempts to reconstruct his life. MacLachlan employs filmic techniques to show how paranoia can lead to insanity, as familiar surroundings turn strange. The novel has also been described as "a topical look at the global reach and media concentration of giant communications corporations."

Murmurs of the Dead (Ekstasis, 2011) is about unsolved murders kept secret by residents of a fictional BC town, and is based on real events that MacLachlan covered as a journalist and television producer.