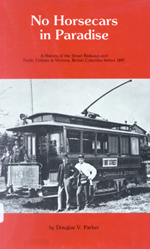 
Born in Toronto and educated in Winnipeg at United College (now the University of Winnipeg), he was a school teacher in Victoria prior to receiving his Ph.D from University of Washington in Seattle. He taught in the Education faculty of the Uiversity of Alberta until retirement in 1992. His study of transportation in early Victoria is No Horsecars in Paradise (Railfare Books, Whitecap, 1981). He has also published a history of the street rail system in Nelson called Streetcars in the Kootenays: Nelson's Electric Tramways - 1899 to 1992 (Havelock House). His five illustrated stories for children are offered in Christmas Stories from the Streetcar Barn, based on the streetcars in Fort Edmonton Park (Havelock House). He joined the Edmonton Radial Railway Society in 1980 as it began to build the street railway in Fort Edmonton Park. When the line opened in 1984, he became its operating superintendent. He continues to work on the restoration and operation of the society's streetcars. With Raymond Corley he co-wrote Interurban to St. Albert: The Edmonton Interurban Railway (Havelock $9.95, ISBN 0-920805-04-3).