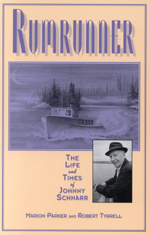 Articles: 1 Article for this author
THE LIFE AND TIMES OF JOHNNY SCHNARR (ORCA)
Article


THE LIFE AND TIMES OF JOHNNY SCHNARR (ORCA) by Marion Parker & Robert Tyrrell. A true, wild west coast adventure! Rumrunner is the story of Johnny Schnarr's career as one of the most successful rumrunners to work the Pacific Northwest during the Prohibition era in the Roaring Twenties. Known for designing and building the fastest boats on the coast, Schnarr made over 400 successful runs, consistently outwitting the Coast Guards of both the United States and Canada. Rumrunner is hyped as a true story of excitement and adventure complete with high-speed midnight chases, bullet-riddled boats, hijackings and even murder.