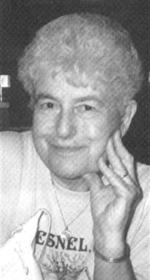 
Born in Shanghai in 1927, Branwen Patenaude escaped with her family from China to West Vancouver in December of 1941. As a rancher's wife in the Cariboo she cooked for her husband's crew of 15 while raising their family in a tarpaper shack in the 1950s. She served as a longtime member of the Quesnel Museum Commission. Her debut historical novel was self-published as Ruby Red and Gold Rush Yellow: An Early Cariboo Adventure, the thinly disguised story of the Cariboo's first Gold Commissioner Philip Henry Nind. The novel's protagonist named Arthur O'Rourke comes to British Columbia, searching for his father, and meets historical characters that include Sir Edward Bulwer Lytton, Sir James Douglas, Reverend George Hills and Judge Begbie.