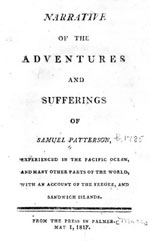 
Between 1802 and 1808, little-known American sailor Samuel Patterson, born in 1785, was a member of three expeditions to the Pacific Northwest, visiting Vancouver Island and Haida Gwaii, later known as the Queen Charlotte Islands. In 1805 he sailed aboard the American brig Juno when its captain and owner, John D'Wolf, Herman Melville's uncle, made his second fur trading voyage to the Pacific Northwest.

Patterson met the "white slave of the Nootka,"; John Jewitt, who was freed from captivity under Chief Maquinna in July of 1805. Ten years later, after John Jewitt successfully re-published an enhanced version of his journal as A Narrative of the Adventures and Sufferings of John R. Jewitt, Patterson decided he ought to take advantage of the genre and publish his own "Sufferings"; with an imitative title. This Narrative was compiled and edited for Patterson by Ezekiel Terry, apparently because Patterson was so unhinged by his sufferings that he could not manage the task on his own.

Patterson's far-reaching memoir recalls visits to Guinea, Havana, Guadaloupe, California, the northwest coast of America, Australia, Canton and Fiji where he was shipwrecked in 1808 and remained for six months. It also recounts his voyages to Algiers in 1800-1802 aboard the frigate George Washington, and a slaving voyage in 1802. In 1807 Patterson was aboard the O'Cain that took some Russian fur hunters and 50 Aleuts and their canoes from Sitka to northern California where the Russians established Fort Ross for fur harvesting and agricultural reasons.

A Narrative of the Adventures, Sufferings and Privations of Samuel Patterson, A Native of Rhode-Island: experienced by him in several voyages to various parts of the world, embracing a short account of the numerous places visited by him in his... and a Particular Description of the Manners, Customs & c. of the People of the Sandwich Islands

Narrative of the Adventures and Sufferings of Samuel Patterson, Experienced in the Pacific Ocean, and Many Other Parts of the World, With an Account of the FeeGee, and Sandwich Islands. Palmer, Mass., 1817.

Patterson, Samuel. Narrative of the Adventures and Sufferings of Samuel Patterson Who Made Three Voyages to the North West Coast of America, and Who Sailed to the Sandwich Islands, and to Many Other Parts of This World Before Being Shipwrecked on the Feegee Islands (Palmer, Massachusetts: 1817; Providence, Rhode Island: 1825; Ye Galleon Press, 1967).