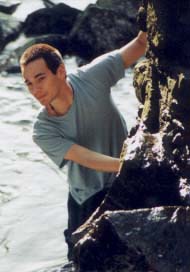 
An NEC Indian from the Saanich Peninsula, Philip Kevin Paul has previously been published in Breathing Fire: Canada's New Poets, An Anthology of Canadian Native Literature in English (Oxford) and BC Studies. He has a BA in Writing and English from the University of Victoria and has most recently worked as an instructor at the Saanich Adult Education Centre. The son of the late Chief Philip Paul - an internationally known indigenous-rights activist and co-founder of the Union of BC Indian Chiefs and National Native Brotherhood - Kevin on his family's titled land in Brentwood Bay. He is also an amateur lightweight boxer; before a hand injury, he was ranked 5th in BC and 13th in Canada. He is the author of Taking the Names Down From the Hill [2003]. [Harbour Publishing, 2002]

Review of the author's work by BC Studies:
Taking the Names Down from the Hill

Articles: 1 Article for this author
Taking the Names Down from the Hill
Info