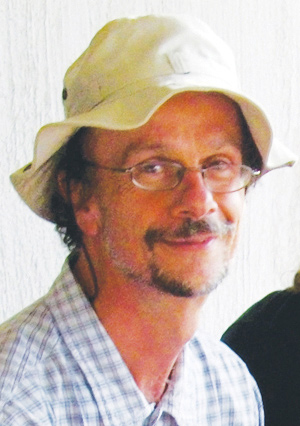 
Born and raised in Revelstoke, B.C., Robert Pepper-Smith has incorporated his background in that region with his experiences as a paramedic with an NGO called Alianza in Guatemala to generate a trilogy that was completed in May of 2017.

From the late 1800s onwards, many peasants left southern Italy to work in the orchards and vineyards of either Argentina or British Columbia. These peasants were called golondrinas: the swallows. Instead of following the swallows to Capistrano, Robert Pepper-Smith followed them to a fictional town in southeastern B.C. based on Revelstoke.

In his first novel, The Wheel Keeper (NeWest $14.95), an Italian family deals with displacement and loss of culture as a proposed hydroelectric dam threatens to flood their village. Their experiences in The Wheel Keeper are told through the eyes of a child, Michael Guzzo. The narrator's grandmother was forced to emigrate from Italy as a young, unwed mother, fleeing to Canada to avoid giving up her child to the church.

Edited by Thomas Wharton, Robert Pepper-Smith's second poignant novel House of Spells (NeWest $18.95) follows the friendship between teenagers Rose and Lacey and their search for self-confidence and acceptance in the same B.C. orchards. When Rose becomes pregnant, the mysterious and childless Giacomo family, whose wealth is well-known in the community, offers to adopt the child. As Rose wrestles with the decision to give up her baby, Lacey recounts her efforts to help her friend and the unsettling discoveries she makes along the way.

Those two novels were republished for a trilogy called The Orchard Keepers (NeWest 2017) which combines revamped versions of The Wheel Keeper and House of Spells with the release of a never-before-published novel, Sanctuary, that looks at the difficulties of creating and maintaining a home, focussing on the plight of economic refugees and immigrants. It merges the stories of Michael, Rose and Lacey from the previous two novels when Lacey goes in search of Michael in Central America.

Born in Revelstoke in 1954, Robert Pepper-Smith has tended a vineyard on Gabriola Island. He lives on a farm in the Cinnabar Valley and teaches philosophy at Vancouver Island University (formerly Malaspina College).

Review of the author's work by BC Studies:
The Wheel Keeper

Articles: 1 Article for this author
House of Spells
Review

Remembrance, cultural traditions, familial responsibilities and the distinct way that nature and the environment influence personal identity all weave together in the sensory experience created by Robert Pepper-Smith in his second novel, House of Spells.

The second book in the Wheel Keeper series, House of Spells is a quiet, gentle story of life in southeastern British Columbia in the 1960s and 1970s as seen through Lacey, an observant and intuitive 16-year-old girl.

Lacey watches for fires in the mountains and forests from a lookout tower on the Palliser Mountain. There she reflects on her family, friends and town in the valley south of Revelstoke. Her precocious yet childlike friend, Rose, becomes pregnant and Lacey struggles with how to help her navigate the waters of motherhood and adoption.

Pepper-Smith's detailed descriptions of the valley and snow-covered mountains are almost transcendental. He describes every touch, taste and smell, emphasizing the preciousness of the landscape to the people who lived there as well as the ecological importance. These physical details are at the heart of the novel. The most engrossing passages happen in moments such as when Lacey helps her father make paper, with its pure white colour from being buried in the dry, fresh snow in the Illecillewaet snowfields.

From her lookout, Lacey delves into her memories in a non-chronological fashion. Naturally the mind works in this manner; however, as a reader it can be difficult to follow. As a result the story lacks a strong cohesive force at times.

Despite her main character status, Lacey comes off as a passive member of her own life, an outside observer. As a young woman, she watches the people around her, learning and questioning life's obligations and responsibilities. She observes the ways in which people care for one another and the place they call home. Through her reflections she doesn't experience one all-encompassing epiphany, but rather the first of many lessons about humanity and the push and pull of life.

Although The Wheel Keeper, the first book in the series, and House of Spells share similar themes, they can be read separately. The narrator of the former, Michael Guzzo, only appears as a minor character in House of Spells, weaving in and out of the story, which is an interesting choice given he is the father of Rose's baby. Pepper-Smith says that Michael and Lacey will both appear in the third and final installment of the series, Lake of Memory, as they travel through Guatemala.