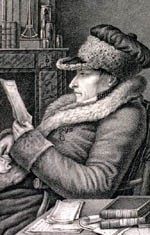 
Just as the great Spanish scientist Moziáo was unheralded in his lifetime-and for centuries afterwards-the work of the great French zoologist Francois Péron was mired in obscurity for more than a century. The Northwest Coast historian H.R. Wagner questioned his existence.

Known as the first trained zoologist to visit Australia, Péron is seldom recognized as someone who visited Nootka Sound in June of 1796. Péron essentially hitched a ride from Sydney, as of February 18, 1796, aboard the Otter, an American trading vessel that had embarked for Australia from Boston on August 20, 1795. Owned by Dorr and Sons, it was commanded by Ebenezer Dorr, formerly second mate of the Hope and later the Fairy. Arriving on Vancouver Island after a four-month Pacific crossing, Péron wrote, "At midday on the 21st, we arrived at an opening in the rocks, through which we could see a spacious bay dotted with many islands, large and small; this is the bay the English call Nootka Sound. As we entered the bay we sighted a ship in the anchorage at the western end of a string of ragged, and dangerous rocks. This was the Spanish schooner, Sutil, of San Blas, north of the isthmus of Panama. The commander of this ship, Captain Cuba, sent one of his officers to guide us into the harbor, which he called Friendly Bay. This officer informed us that as a result of protracted negotiations between England and Spain, the latter power had undertaken to abandon its claim to this port, and that the object of the Sutil's mission was to make a report on whether the English had done likewise, as agreed. The Spanish crown had reason to be distrustful, he said, as two English warships had been sighted in the vicinity. The object of our visit to Nootka was to procure fresh supplies, and in this we were cruelly disappointed. Captain Cuba showed us every mark of kindness, but he could not come to our aid.";

The Otter traded on the coast for six months, reached Hawaii on January 1, 1797, and reached Macao on February 13, 1797. By the time Péron finally returned to France-where he had been born in Cerilly on August 22, 1775, the son of a harness maker-he was primed to continue his remarkable life of adventure. Already he had joined the revolutionary army in 1792. He was taken prisoner and lost an eye before he could return home in 1794. This time he was determined to join the Baudin expedition to Terra Australis as part of a team of 22 civilian scientists on Le Géographe and Le Naturaliste that embarked in 1800. The deep antipathy that arose between Péron and Baudin is well documented in their memoirs. Many of the scientists were forced to leave the two ships in Mauritius due to illness, so junior members such as Péron and his artist friend Charles Alexandre Leseuer rose to prominence.

With his medical training, Péron undertook studies in anatomy, anthropology, botany, zoology, meteorology, oceanography and naval hygiene. The multi-skilled naturalist also taught Lesueur some botany, taxidermy and how to trap animals for his drawings. At King George Sound in Australia, Péron, as chief zoologist, collected more than 1000 species of seashells and starfish. Péron and Lesueur killed and preserved countless specimens in jars filled with alcohol, ultimately returning to France in 1804 with more than 100,000 specimens in 33 packing cases aboard Le Naturaliste.

In 1806, Emperor Napoleon gave his permission for Lesueur and Péron to prepare their findings in a Voyage de découvertes aux Terres Australes, to be written by Péron and illustrated by Lesueur. A first volume appeared in 1807 but Péron died of tuberculosis on December 14, 1810. Under the control of map maker Louis de Freychinet, a second volume appeared in 1816. Péron's opinionated memoirs appeared in 1824 but most of the natural history collections made by Péron and Lesueur were not exhibited. Lesueur had to wait until 1846 to regain access to his drawings and Péron's research. It took almost 200 years for their collections to be finally shown to the public.