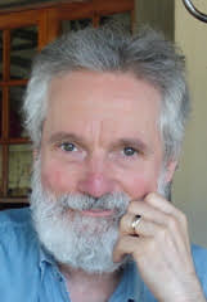 
Dr. Peter Carter of Pender Island is founder of the Climate Emergency Institute.  He has served as an expert reviewer for the IPCC's fifth climate change assessment in 2014. He has also presented on climate change issues (especially the implications of global climate change on food security for the world's most vulnerable regions and populations) at science and policy conferences in Canada, the United States, Europe, Asia and South America. He is a former family and emergency medicine practitioner before retiring to focus on the climate crisis for the sake of his sons and their children.

While arguably the most urgent issue of our time, climate change makes for a poor villain. It is impersonal and usually glacially slow.

Meanwhile, there are uber-rich, faceless corporate villains lurking behind the rise in planet temperature. These are people who strive to ensure the planet is fossil-fuel-addicted.

Such corporate crime stirs the moral outrage of Dr. Peter Carter and Elizabeth Woodworth like a legion of Nazis bent on similar world domination once stirred our grandparents.

With chapter-after-chapter gut punch, their book Unprecedented Crime: Climate Science Denial And Game Changers For Survival (Clarity Press $27.95) mustn't shouldn't be overlooked in this increasingly post-truth age. It reads like a UN science team jointly making a life-and-death 911 call recording to a planet of primed and waiting emergency responders:

In a time when common sense human survival strategies are becoming uncommon in the White House, and our atmosphere and oceans are deteriorating with each passing hour, Carter and Woodworth, as honest brokers of factual scientific information, have exposed the moral and intellectual bankruptcy of Big Oil glory days and their approaching end of days.

The foreword by Dr. James Hansen, former NASA scientist and pioneering climate-prophet, provides the twists and turns between nightmares and hope.

The opening half of Unprecedented Crime deftly argues that climate denial is not just immoral; it must be considered a willful act of global-scale violence that will particularly affect  today's vulnerable and dispossessed.

The writers chronicle how the small, billionaire-funded denier community has created near-death global experiences for the millions who are facing record-shattering tornado swarms and hurricane force winds, and those who are barely escaping wildfire infernos with the clothes on their backs or awaiting rescue from rooftops in flood-ravaged regions.

They also cite the gravely under-reported trauma of drought-stricken subsistence farmers watching their crops shrivel and die during intense heatwaves, and poor fishers experiencing the slow asphyxiation of fish in warming oceans and disappearing lakes. As well, human and non-human species are being forced to migrate due to deadly climate disruptions, habitat loss and conflicts which inevitably arise when resource scarcity becomes more acute on a hot planet.

Carter and Woodworth forcefully argue that it's time for Big Oil 'take-the-money and-run' psychopaths to take full responsibility for the devastation they have wrought, as well as the moral confusion they have profitably cultivated--and to make them pay for the global damage they have done.

While most governing parties in the world refuse to prohibit extraction of the oil and gas on their doorstep or fossil fuel imports due to the climate trivialization work of deniers and hydrocarbon-trafficking lobbyists, the authors 'name and shame' the deniers (and aiding and abetting bankers, media, shareholders and politicians) as among the evilest villains in the history of humanity.

Carter and Woodsworth reserve the remainder of their book to 'game changers,' to those who have demonstrated the courage and prescience to pull the emergency brake on the runaway climate train.

The climate crime-fighting authors controversially support the creativity, gumption and grit of greater civil unrest and civil disobedience necessary to get reticent world leaders and their citizenry to urgently respond to the Paris Climate Accord 1.5C guardrail.

While exposing planetary corporate ecocide, they cite Trump's toxic political malabsorption and they criticize Justin Trudeau's Liberals for threatening "genocidal relapse" when they argue non-consenting indigenous communities should not be forced to confront the tarsands and new pipelines.

Action is necessary if we want to have a habitable world for our gravely at-risk children and grandchildren as we are facing an ecologically ticking time bomb. Therefore, if you are someone feeling sadness or fury at the state of the world, the authors say it's time to put those feelings to good use!

Because there is little time remaining.

Don't wait for the final courtroom impact statements or another climate collapse documentary. Read the book before the climate denier bully mob have it banned and burned (but don't be surprised, if half way through, it makes you want to go out and blow up a pipeline).

If read, the smart money is on you -- making a difference that matters -- a difference that won't cultivate the denier lie that the climate emergency is a hoax (but hey, pro wrestling is real), and that there will always be someone else to save the world. All readers of UNPRECEDENTED CRIME should

Unprecedented Crime is a rallying cry. It is an effort to deputize the reader to confront the lawlessness of carbon racketeers hiding in plain sight behind the autocratic corporate state--and to replace complicity with conscience.

Howard Breen is a Victoria, B.C.-based writer and climate activist.